It’s time to shoot something down. Two F-14s and helpless Tu-22 bomber in one-sided fight over ocean. Aerosoft’s F-14 X and TackPack test and review.

Flying with my wingman

When taxiing on carrier’s deck I keep my wings in full-aft position. It’s tight in here and the size of the F-14 does not make things easier. Once at the catapult I kneel and lower the launch bar.

Kneeling is visible in the outside view only. Supposedly FSX does not allow for such an animation in cockpit view (although it’s strange – suspension in some aircraft reacts on the weight changes so I do not understand why it’s not possible to make a similar effect in this plane).

I fly from the USS Kitty Hawk – provided by the Aerosoft in F-14X package.

Back to my story…

Once the F-14 is attached to the catapult I go through the checklist. Wings – full forward. Flaps – full. Controls – free and correct. Throttle – full afterburner. Stick – pull. Ready to launch. Shift+space fires the catapult shuttle forward. Seconds later the Tomcat is in the air.

Target is located around 200 to 300 miles to the south east. Hawkeye AWACS plane had to land early and until the backup launches and climbs I have to rely on my AWG-9 radar only – the engagement will probably be over by the time the second E-2C is ready.

It’s a “deck launched intercept” sortie. Following the mission profile (it is a real world mission profile for F-14) I climb to 45.000ft with full afterburner and then head straight for the enemy at 1.8 speed of sound carrying four Sparrows and two external fuel tanks. I have just enough fuel to intercept a plane that is 240nm from the carrier and get back. Plus 2 minutes for combat. If the combat lasts longer or the enemy runs beyond 240 miles I will have to refuel from KA-6 tanker on the way back. Intruder tanker is being readier on deck as I climb.

Aerosoft provides KA-6 AI tanker with F-14 X. It’s the RAZBAM’s KA-6. In my flights I mostly use TackPack generated KA-6 tanker (also RAZBAM’s – I have their A-6 add-on). RAZBAM A-6 (and KA-6) is an outdated and mediocre plane if you want to fly it but it looks very good as an AI. Outside model is much better in this plane than the Virtual Cockpit.

I am still trying to get F-14 to work correctly with FS Recorder – currently I experience problems with wing fold and afterburner effects.

The F-14 is in climb and there is not much to do in the front seat so I move back and set this powerful radar in Pulse Doppler Search mode. In this mode I will get only bearing and relative speed information but it’s the best mode to find the target – it works well even if the plane is flying low. I use the widest horizontal and vertical sweep. At the moment I have no idea where the target is – once I have a bearing on target I will restrict antenna movements and change the radar mode. 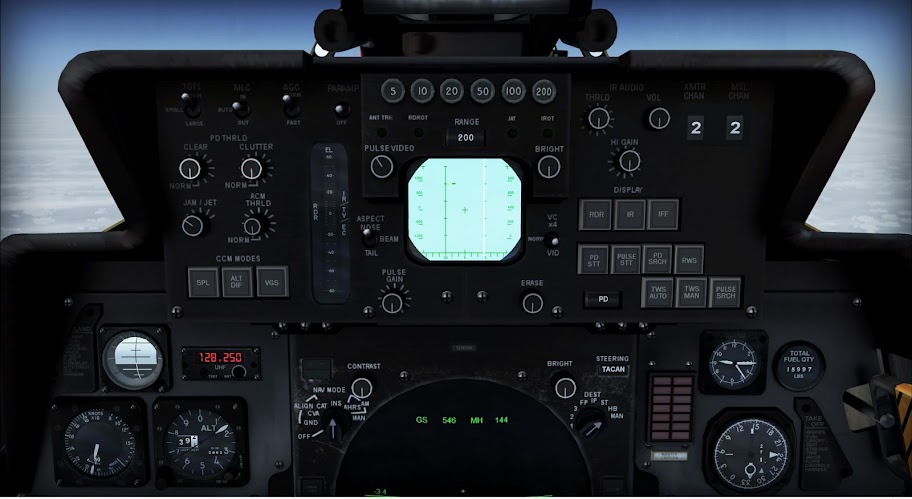 Until I am at 35.000ft I climb steeply. Then I speed up in a shallow climb placing the radar at a better attitude to look down. Instantly RIO sees the dot on his screen and commands 20 degree turn to the left. I turn and go supersonic in a cruise climb.

PD Search mode shows the contact bearing and relative speed but does not show the distance. To get it I change the mode to RWS – Range While Scan. I know more or less where the target is so I choose a narrow (+/- 20 degrees) field of observation. Now the dot has moved to the upper part of the radar scope. The range is set at 200 miles so the target is slightly closer than that. I switch to TWS mode (Track While Scan). Now my radar will memorize the position of my target and compare it between each antenna sweep giving me all the details it can – position, relative speed and altitude. It’s at 30.000 ft and moves right. I have trouble tracking the target. At times the dot disappears from the scope. I correct my attitude to move the blind spot away from the target position (at this range the blinds spots between horizontal sweeps are a factor that should be considered). 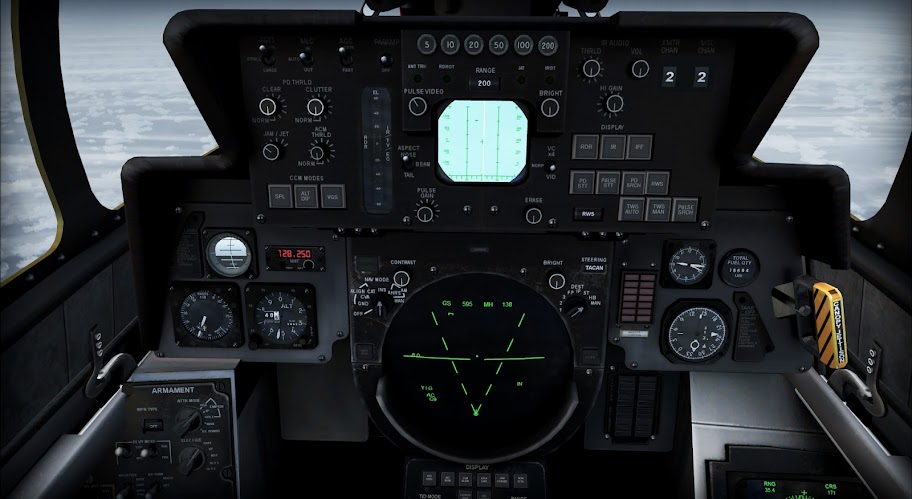 RWS – range and a position on a lower scope

Again I correct my heading. 128 miles to target. It’s time to warn the enemy. By this moment bomber crew already knows that there is F-14 radar searching for them. But they do not know if I already found them (they should – there is no chance that AWG-9 would miss a plane large like theirs). When RIO changes radar mode to PD STT – Pulse Doppler Single Target Track the enemy crew knows that they are the target – powerful radar directs all it’s energy at the bomber – in PD STT it basically generates a rocket guiding beam. Wingman’s radar is switched back and forth between PD Search and RWS modes – to make sure that there are no other targets in the air. My at PD STT mode will not show anything apart from the single target. The radar antenna is currently directed at the contact – it does not sweep anymore.

The target is not turning away so I prepare for interception. Empty tanks are jettisoned. HUD turned to A/A – Air to Air and decluttered. The upper screen – TCS camera should show the target soon.

This device leaves much to be desired – the real TCS can enlarge a plane so that a bomber can be recognized from tens of miles – F-14X by Aerosoft has only a slight (and fixed) zoom. It looks good on the screenshots but is mostly useless in a tactical situation it was designed for… And it does not support DX10 mode.

I can not recognize the plane on the screen. On the other hand – radar tracking worked – the target is turning back. 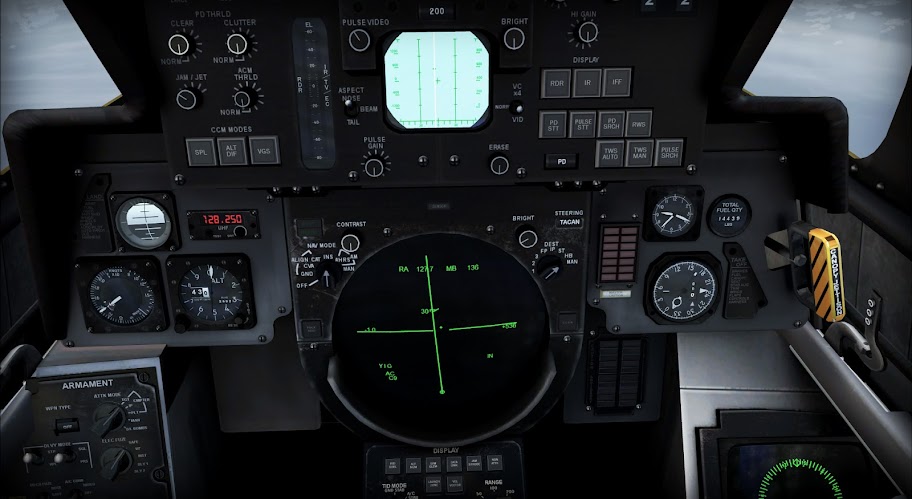 This line means that I am tracking a single target 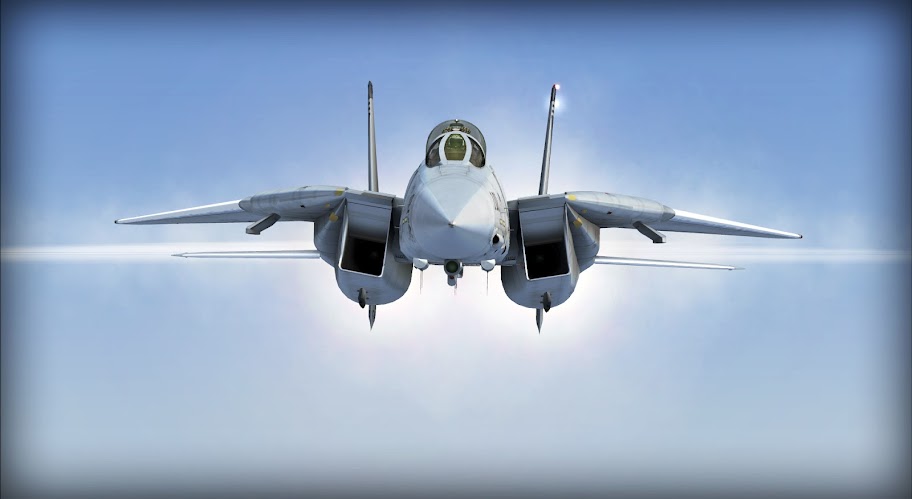 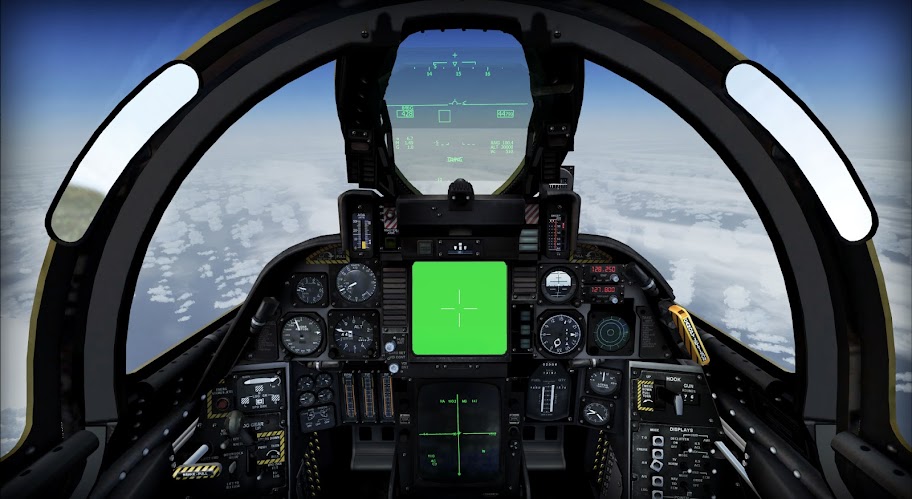 Master Arm still in Safe position – weapons are not ready.  means that I have more then 600 rounds in my Vulcan gun. It’s in safe mode.

35 miles to target. It’s turning north once again. Will it fight or is he just provoking me? I reduce the power and maneuver to position myself above and behind the target. The wingman is flying a wider arc to cover me. Rules of engagement are simple – do not fire until fired upon.

HUD shows a precise information about the distance and range to target. Both vales are decreasing. When I am a few miles from the target I can see tracers from his rear gun. I do a split S at full afterburner – that takes me out of bomber’s guns range. At the same moment the second F-14 is turning to get the best firing solution on the Tu-22. Fox One! Sparrow missile drops a little before it’s rocket engine ignites. Then it goes straight to target. That is how the AIM-7 works. If it was an AIM-54 Phoenix long range missile – it would climb rapidly to hit it’s target from above. But semi-active AIM-7 does not have Phoenix’s capabilities. 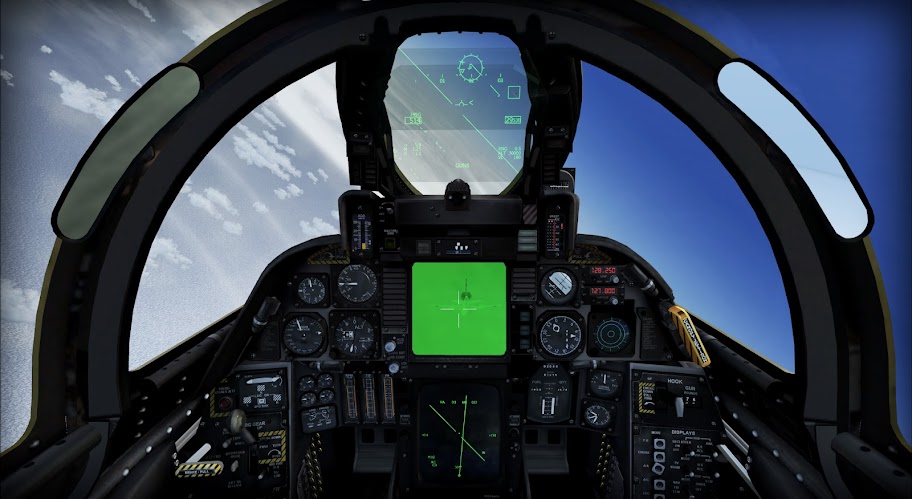 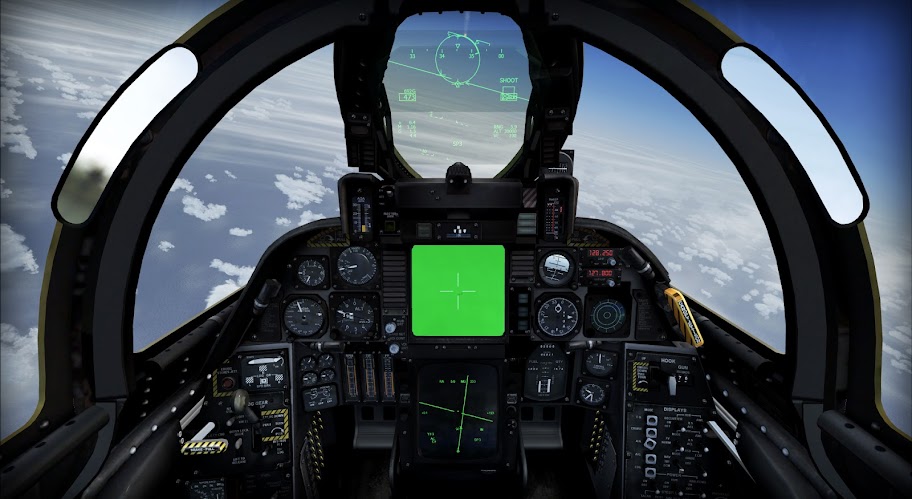 AIM-7 heading for it’s target. HUD shows the next missile is ready 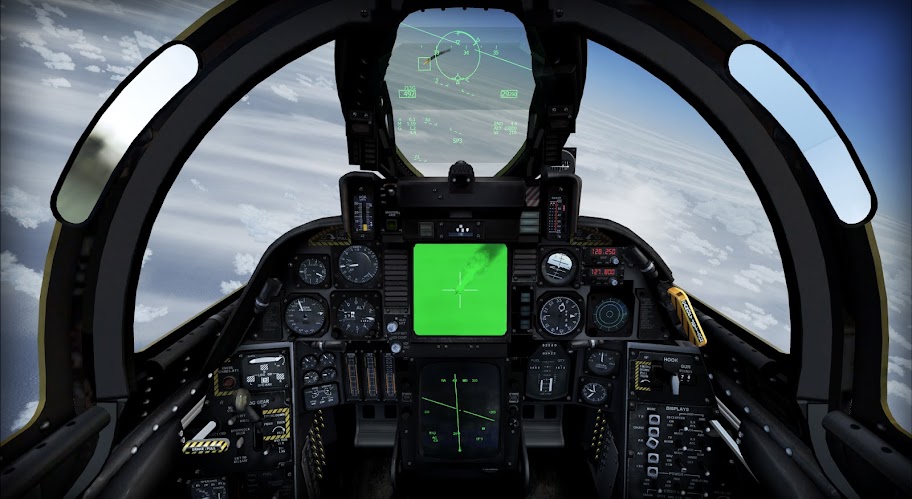 F-14’s radar illuminates the target and AIM-7 antenna receives the reflected signals. It’s an outdated technology. In a dynamic combat it can be unreliable. Today the conditions are perfect – F-14 pilot has no trouble pointing his radar in target’s direction and Tupolev bomber gives a strong signal reflection. The explosion is small but the Blinder (NATO code for Tu-22) is set on fire, banks hard and dives towards the sea trailing black smoke. Both Tomcats rejoin in formation and overfly the crash site – no parachutes. Mission is over – time to get back.

At economical cruise Tomcat burns 5.000 pounds per hour. It took me 25 minutes to get back. Lead Tomcat has enough fuel to make several landing attempts. Wingman is left with 3 or 4, but it’s still plenty. Wingman usually has less fuel as he uses power and brakes to keep up in formation. 3 or 3 landing attempts it is a lot – usually planes get back to carrier having enough fuel for two landings – three is a luxury. 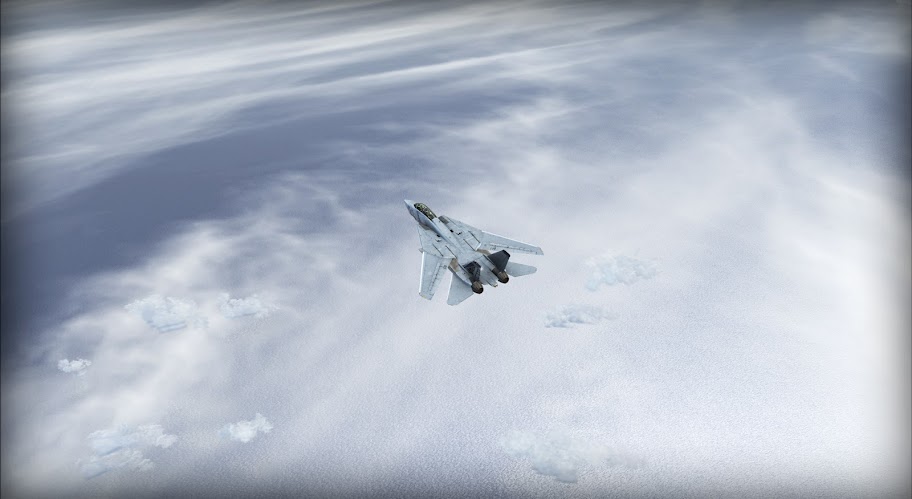 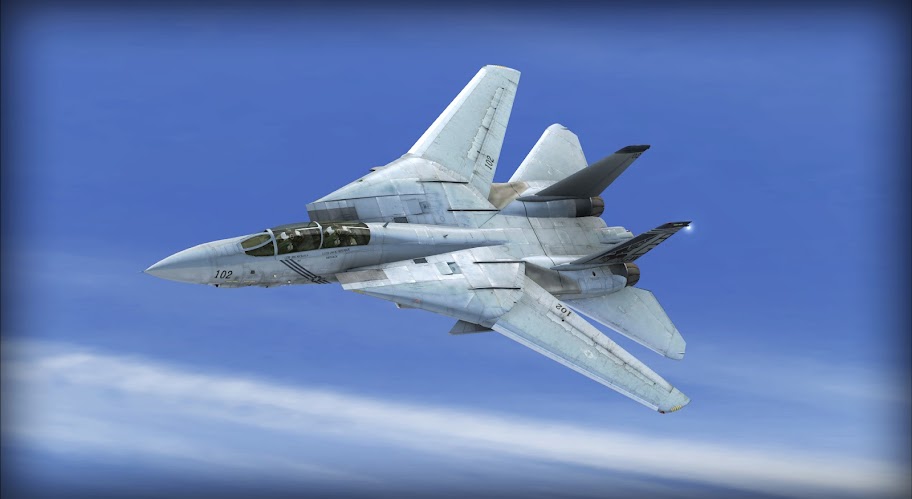 Descending towards the carrier

How it was done?

I flown Aerosoft’s F-14B. Tu-22 was generated by the TackPack – I placed it on FSX map using TP panel. The second F-14 you can see was flown using FS Recorder software. As I mentioned earlier – there are some problems with animations and effects when FS Recorder files are played. Tracers from Tu-22 guns were imaginary.

I created this mission using a real world mission profile of the F-14 and I tried to recreate the combat to the best of my knowledge. I like how this F-14 allowed me to do that.

This flight tested how the Aerosoft’s F-14 will manage following the real flight profile. It did good! I intercepted the target a little closer than 240 miles set in the profile and I got back with appropriate amount of fuel. The radar worked close to the real descriptions. I am very satisfied! 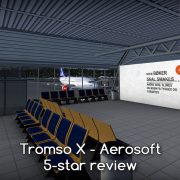 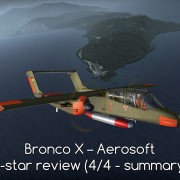 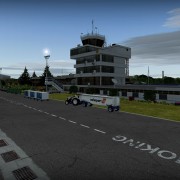