Samos – one of the most challenging airports in the world. The IFR approach puts the pilot high and on a course perpendicular to the runway. Then, it is necessary to maneuver along a mountain slope before coming to a short final to the runway that is just two kilometers long and leaves no room for mistakes. 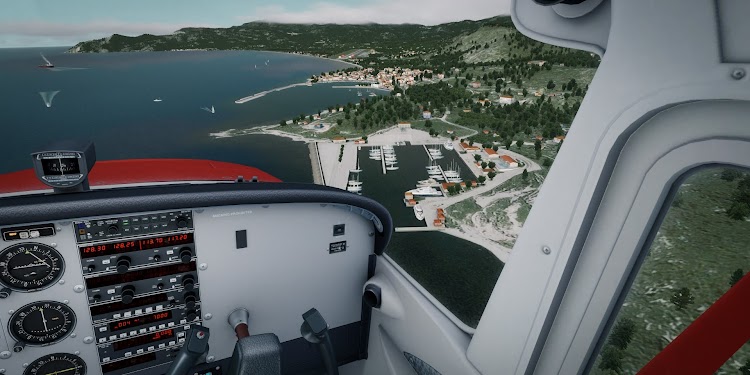 It is difficult to break away from the stories of ancient history when in Greece. It is Samos where Pythagoras and Epicurus were born, Aesop was a slave and Aristarchus worked here – later Copernicus referred to his work describing the heliocentric model of the solar system.

Pythagoras is still present today – a small town and port on the eastern side of the airport bears his name. Pilots use it as a landmark on approach to runway 27. And one needs such landmarks here as the ILS procedure brings pilot nowhere near the threshold.

I like airports like this. I recently reviewed Innsbruck and Dubrovnik. And like there mountains surround Samos and limit the approach and departure routes. As in Dubrovnik state border complicates and restricts the airspace of Samos. The complicated character of Greek-Turkish relations allows no approaches violating Turkish airspace. Besides, the mountains on the Turkish coast would not make this task easier.

Aircraft approach runway 09/27 flying due north. Only after breaking the cloud cover at low altitude pilot maneuvers to line up with the runway on a short final. Similarly, they depart with a climbing turn just after take off. Only when clear of terrain can the plane fly into the clouds and turn towards the destination, usually north or north-west, as most flights carry tourists from Europe. 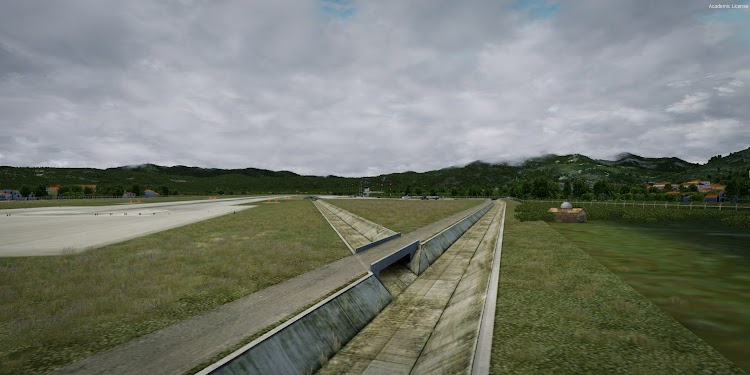 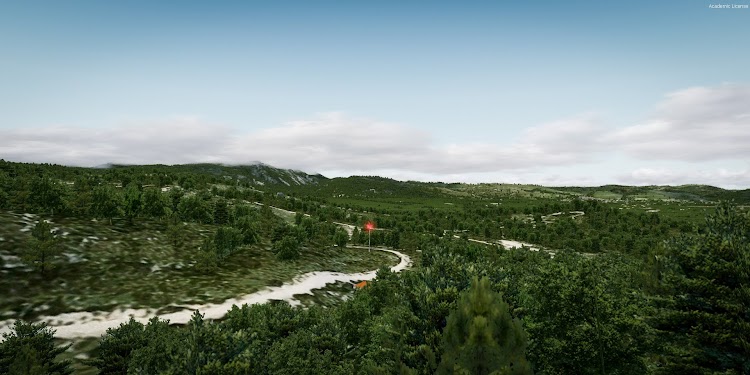 Samos is the third Greek airport developed by the 29 Palms team. Aerosoft published previous ones (Skiathos and Mykonos). I reviewed Skiathos and I see a lot of similarities in both the airports’ appearance and in performance. I notice similarities to other products by 29Palms too (Sumburgh published by ORBX, Twentynine Palms and Magdeburg released with Captain7). I reviewed all these airports and each time my reviews were full of admiration. It is no different here.

You can buy Samos at 29Palms’ store and in other popular add-ons stores like Simmarket and Aerosoft. The scenery is compatible with FSX and P3D (v3 and v4). 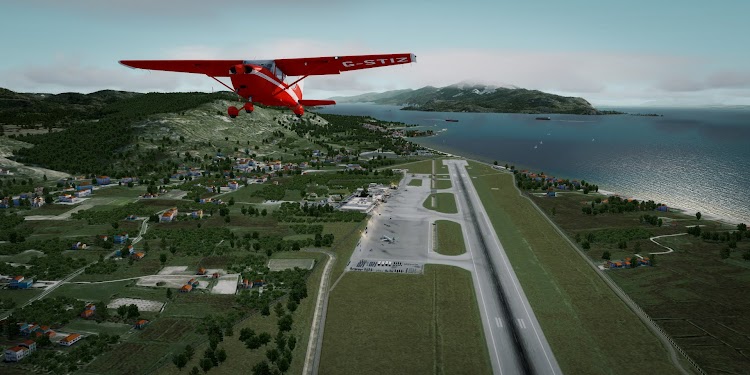 Photoscenery covers the airport reaching several kilometers in each direction and is covered with custom autogen, which looks like local architecture – you will see a lot of white houses with gabled, brick-red roofs.

Scenery includes three towns – Pythagorio, Ireo and Chora, located east, west and north of the airport. There are also yachts and boats anchored or moored in ports and marinas of the scenery.

The manual describes the approach – which helps during the first landings. Links to videos showing the approach and a short description of the tragic flight of Short 330, which crashed in 1989 while flying over the mountains approach that is no longer in use today. It also provides aerial charts. Although easy to find them – I appreciate including them. I like the illustration showing maneuvering (visual) part of the approach.

Configurator utility allows the user to reduce sceneries impact on performance. I think this scenery is light on my system, but for low-end PCs, it may be a good idea to remove less needed objects (like the cars in the parking lot in front of the airport). The density of 3d grass can be changed too. It also gives a choice between default FSX or P3D trees or custom animated trees. It marks each option with a comment showing the performance hit.

I find landing a Boeing 737 at low visibility and with strong winds to be the biggest challenge. The wind disrupts the final phase of the approach when the pilot already sees the airport and maneuvers to line up with the axis of the runway. The southern wind was troublesome for me – extending my turn and pushing me north from the runway.

It is different in low visibility. According to the approach chart pilot descends to the minimum height and then flies level until he sees the airport. If he gets too close – the following maneuvers no longer resemble the elegant curves drawn on the diagram which I showed above. Keep in mind that the plane is still high- Cat A and B planes can descend to 1730 feet and Cat C planes (like most 737s) cannot go below 1860. Min. height for Cat D planes is even higher – 2450 feet, but these are rare in here. Consider this before flying to Samos in bad weather – you may end up being close to the airport with lots of turning to do while descending steeply from 1860 feet. The autopilot will be no help.

The departure is so much easier and it does not require special skills. However, it takes a lot of time. SID-1, the departure procedure for both directions based on VOR and DME is 21 miles long. Departures SID-2 and SID-3 (based on NDB and DME) require flying 33 nautical miles before the plane gets back to the point over the airport ready to start the proper departure on its intended route.

Flying VFR in Greece is subject to severe restrictions, over the Aegean Sea – near the border with Turkey. For many airports, they designated VFR routes for departing and arriving aircraft. This is also the case for Samos where the airspace constrained by mountains and the state border. On the southern VFR, route pilot is required to fly the last 15 miles at low altitude (1,000 feet) – below the IFR approach and departure track. Airplanes coming from the west have a better route – the first limit is 3,500 feet at 10 miles. The next leg (11 miles) requires a flight altitude of 2000 feet and only the last 7 miles are to be flown at 1000 feet.

Whoever tired Skiathos (the same developer, but published with Aerosoft) remembers a few distinctive elements that appear in Samos too. First – the drainage channels. The airport is located on the plain, just a few (5) meters above sea level and next to the beach. In this situation, the easiest solution to the problem of draining the water is to channel it towards the sea. A simple solution in the real world may cause a problem in FSX/P3D scenery that usually flattens the whole airport making any ditches a rather unusual feature. Many developers give up on such features. Not this one. They have modeled even the culverts under taxiways.

I don’t praise developers for placing a three-dimensional grass at the airport which becomes a standard feature. But let me comment on this element here – the grass is not only placed densely but also appears between the concrete slabs of the airport plate. It is a small detail, but it adds character to the surroundings of the parked airplane and suggests that the technical condition of the apron leaves something to be desired. 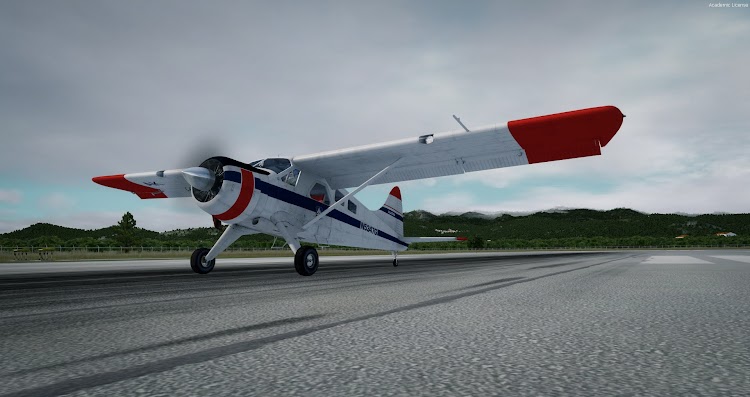 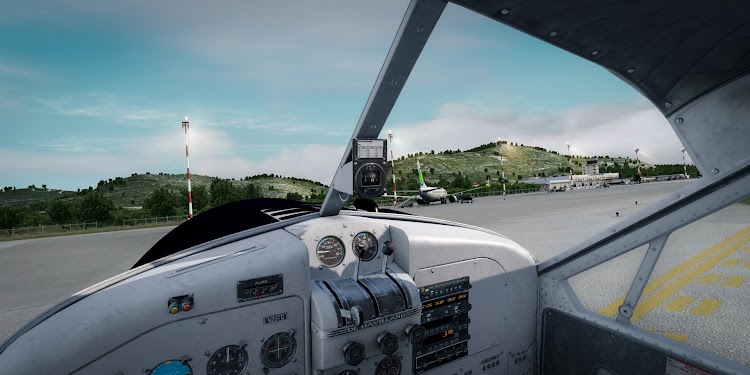 I tested the scenery in FSX and in P3Dv4 – in both the scenery works well with all the configuration options enabled.