Vector – what is it?

FTX Global Vector is a vector scenery add-on that changes (or adds) the following: 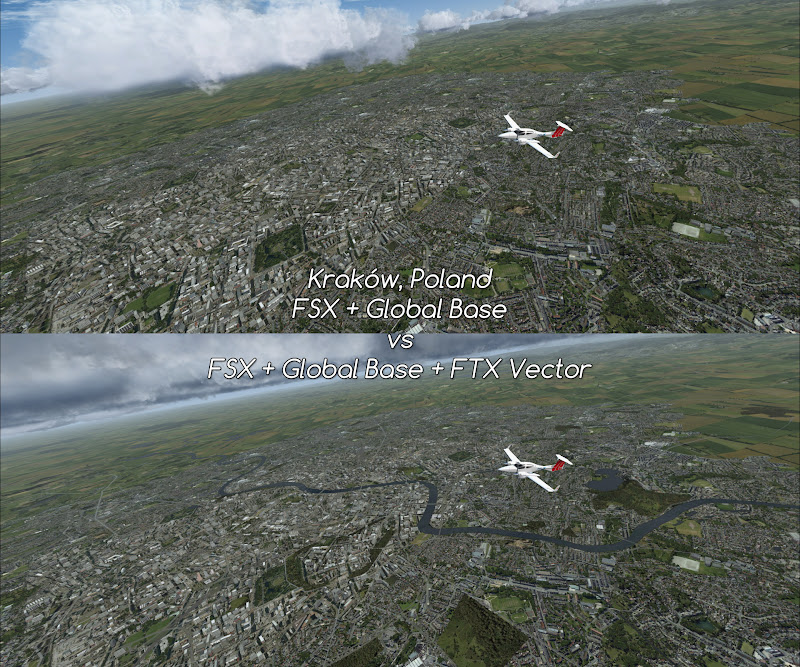 A missing river! Why do you need a vector scenery?

I often fly VFR in places other than USA or Western Europe. For example over Poland, Ukraine, Asia, Far East and Africa. Every once in a while I try to fly along some river that… is missing from my FSX. Like it was never there. It would be ok if the river was small and insignificant but it often happens over some pretty large ones – like Vistula in Poland. That’s our largest river and it’s in the middle of Europe! You can see Krakow on a screenshot above – even in this place it’s 70-150 meters wide. I also missed some lakes. And I do not want to even mention roads – they are either outdated or just not there…

Why is that so? Unfortunately FSX was first published in 2006 – a moment before electronic maps become popular (Google Maps service was started only a year earlier). In those days high quality vector data was not so affordable and in case of some regions – it was difficult to obtain (even for companies like MS). FSX:SE and Prepar3D both kept original data… 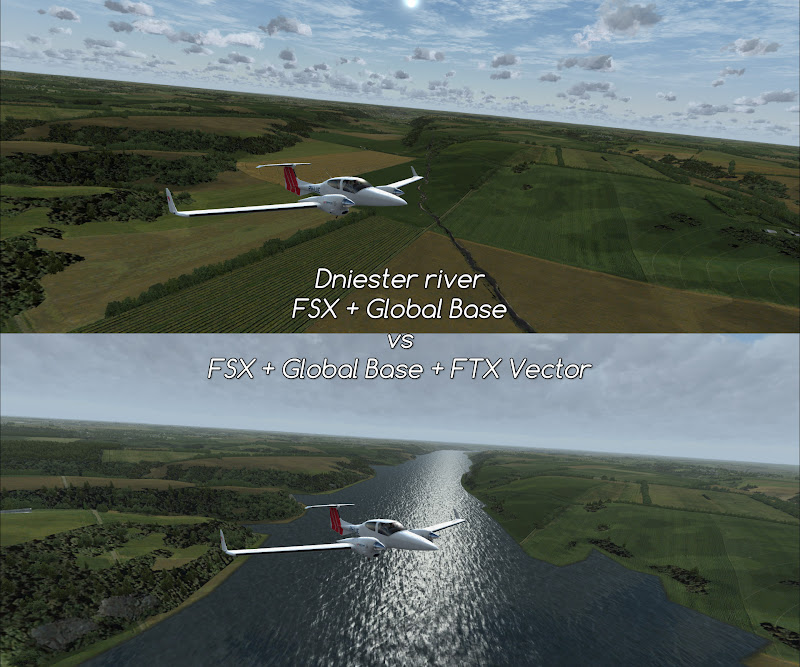 What is exactly missing in FSX

Roads! They are usually outdated (think about all the roads they build since 2005/2006) and not detailed enough (this applies to roads outside of United States. If you like to follow roads and motorways when you fly – you need an update.

Rivers and lakes – they make great waypoints in VFR flights and it’s really disappointing when the one you chose is missing. Take a look at my Dniester screenshot. I found out that this river is missing when I was in the middle of my flight to Romania. And I was (back then) in a P-47 – with no radio navigational instruments…

Detailed coastlines. They are more or less correct in terms of shape and direction but they lack details. FSX always defines coastlines with a series of straight lines. It looks fake. Recreating natural features requires something… more varied. 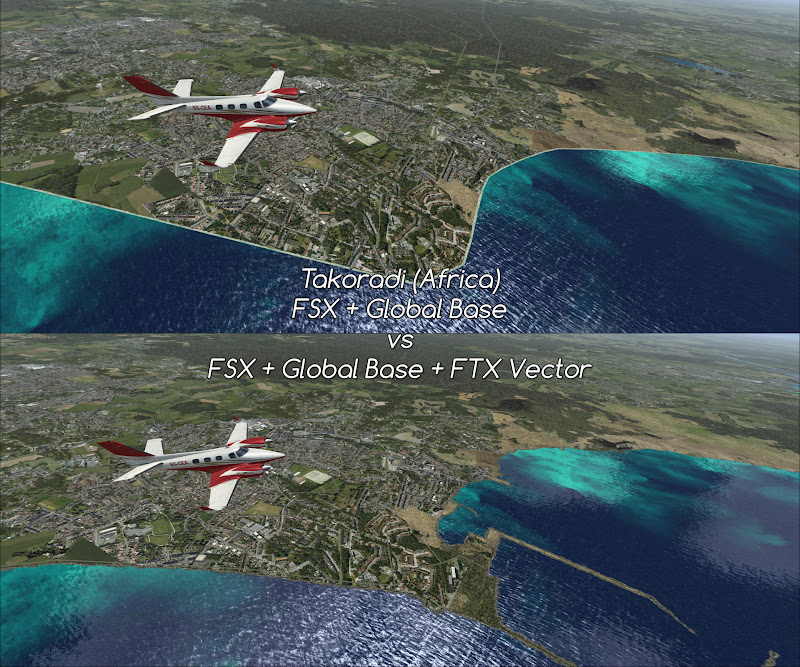 This is where you need Vector

FTX Global Vector basically solves all the problems I just mentioned. When I tested it for currency – the only missing road I found was the one build in December 2013 and in 2014. Apart from that – all the recently finished roads I checked were there. Recently – in last 3-4 years.

You will find the biggest difference in places that had the worst data in 2006. So Africa is amazing now. Asia changes a lot. Both Far East and Middle East have much more detailed road networks. The only mistake I found in these places was a small road missing in Chad.

Rivers and lakes are finally in my FSX! I did not find a single mistake here – and I did a lot of test flights.

Coastlines are finally rough/jaggy. Apart from places where long stretches of beach even the coastline they are full of small insets. That completely changes the way I feel when flying over Caribbean and Pacific Islands. They look really nice now. 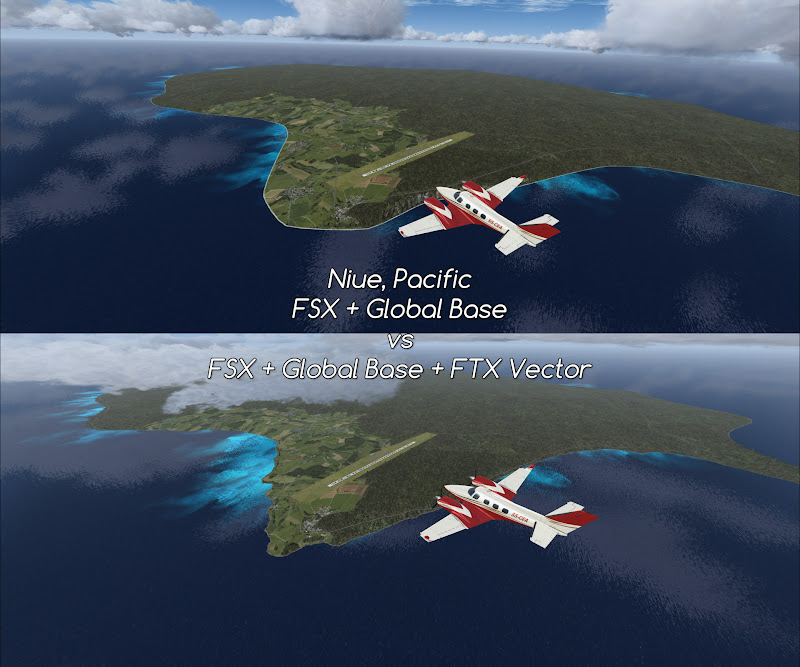 Pros, cons and the competition

Advantages of having a good vector scenery are clear – now I can navigate visually and I have more fun. Coastlines also add much to the visual impressions.

There is a similar vector scenery for Europe and USA – Ultimate Terrain X v2 (Europe and USA are solde separately). There is a difference in what these add-ons offer – UTX includes landclass scenery that ORBX published separately (openLC Europe). The other difference is in the currency of vector data – a road which was missing in FTX Vector (the one that was build in 2013-2014) – UTXv2 shows this road. I had only few screenshots to compare both add-ons and I feel that Vector has a better “water” (rivers, streams). I also found (take a look at my test) that it lacks some harbors. Ports and docs are one of my favorite features of FTX Vector. There is also a difference in price – UTX costs $29.99 Vector – $50 (U.S. Dollars at current rates – the price is 69,95 Australian Dollars). But the first covers Europe, and the second – the whole world.

If you fly all over the world – you do not have much of a choice – there is also openVFR add-on if you need to buy separate countries it will quickly become very expensive. 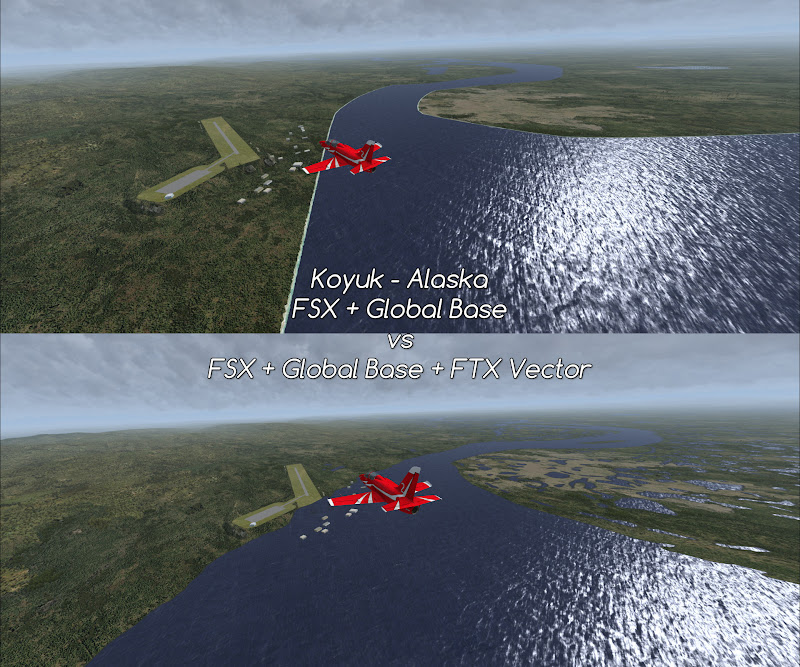 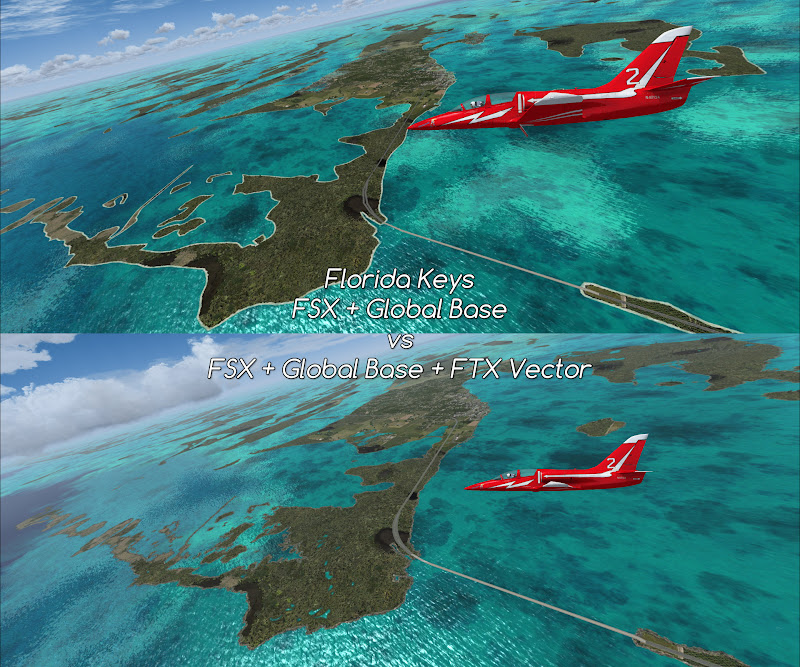 As with all vector sceneries – terrain processing works slower after Vector was installed. It’s normal – the amount of data increased but when I fly military jets – I noticed blurries occurring at lower speeds than before. If you have regional FTX sceneries – performance will be similar or better.

If you notice performance problems – use the configurator to exclude some elements. 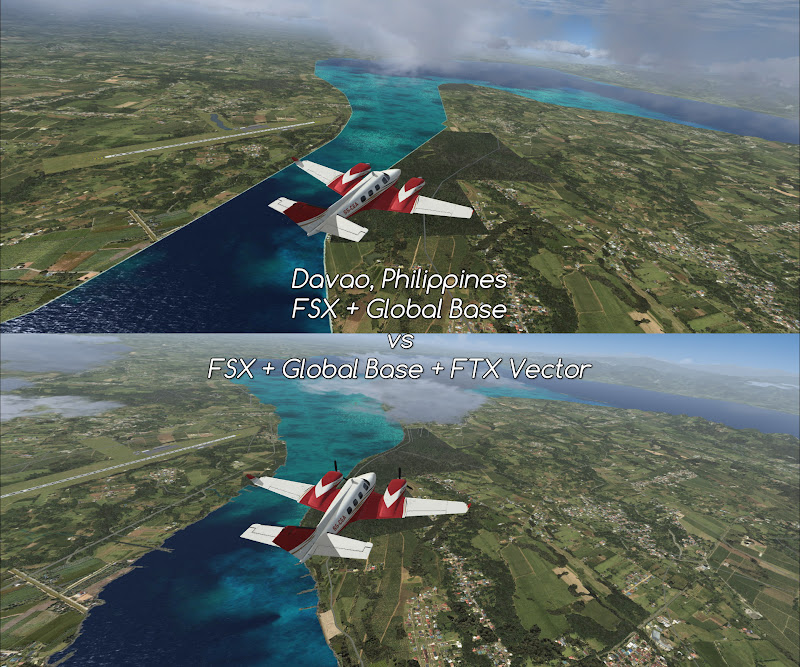 You can turn off selected elements. Additionally – you need this tool to exclude your payware airports from ORBX’s corrections. It’s an automated but necessary process – just click the button.

Apart from things I noticed during my flights I made 30 “before and after” tests.

In all 30 places I noticed additional elements. 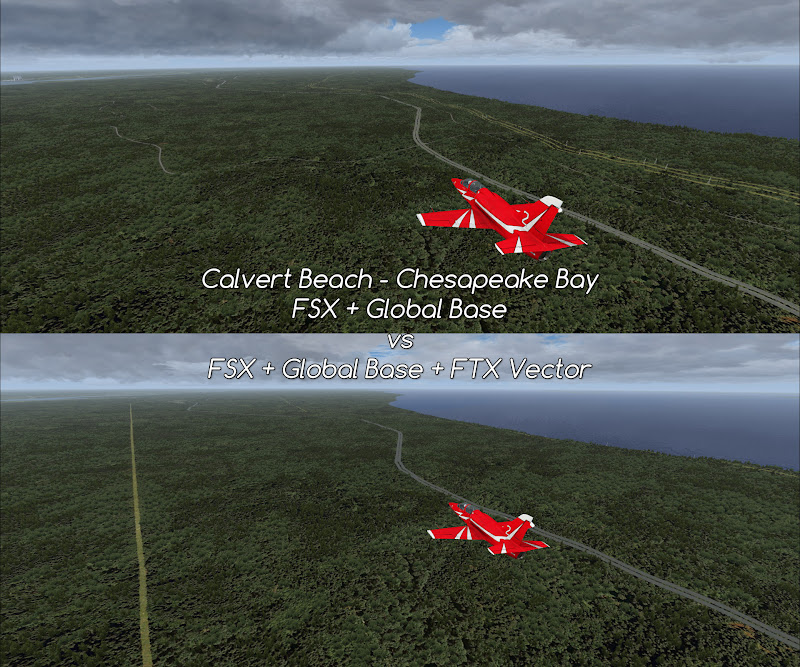 Once (Calvert Beach) I noticed that a power line was missing. It is included in default FSX scenery.

Twice (Carey Lake CNX3 and Koyuk – Alaska) a shoreline was moved so that something was over water (the runway and autogen).

There are places (like Stockholm, Sweden) where I had to look very close to notice the differences. Also on Long Island the difference was mostly in how good the roads look. 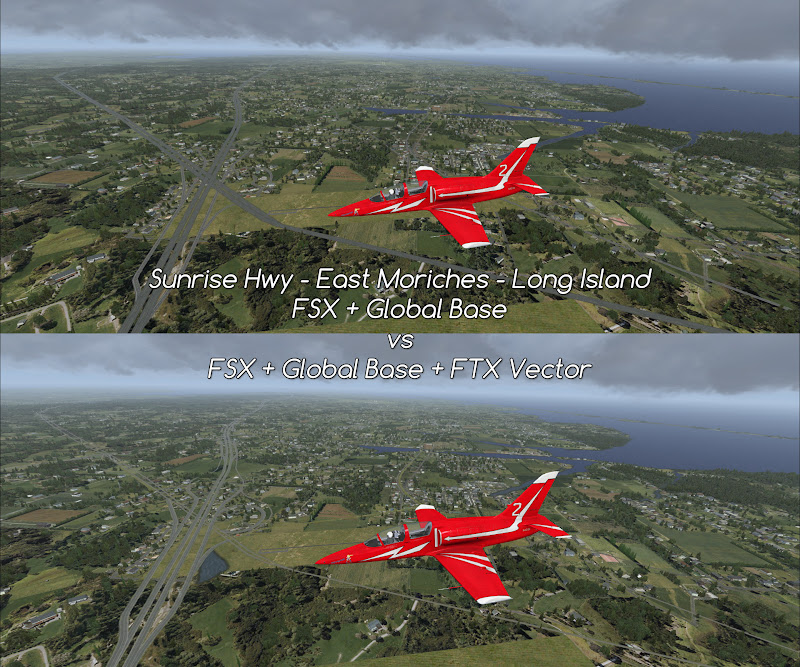 Other places (most places on Earth in fact) look much better than before. The difference is noticeable and sometimes it’s a huge difference. Kraków and Dniester river are such examples. Niue, St. Vincent and Florida Keys show how different the coastlines are. 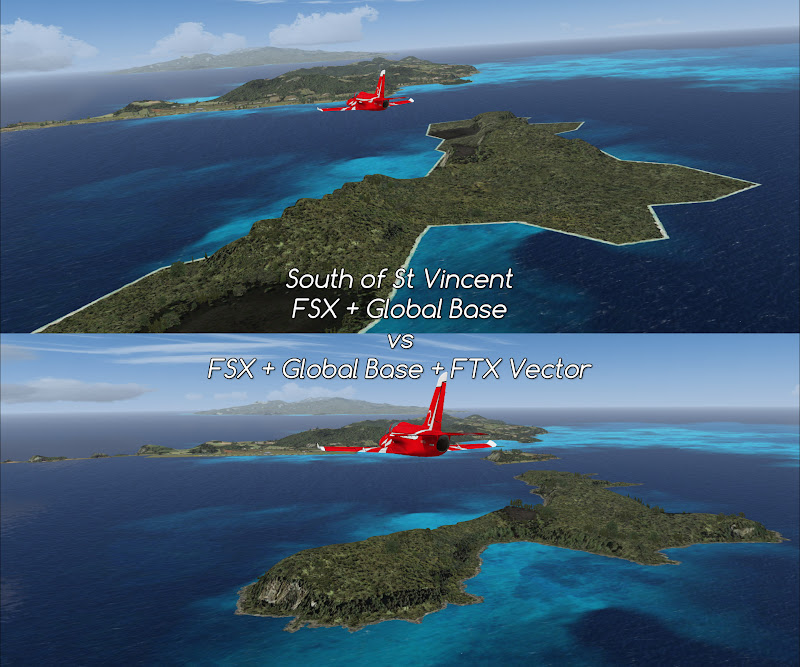 Takoradi (similarly to many other port cities) received a harbor and a better coastline. Nile in Asuan is very different from the river that flows through the default FSX.

A few words about my comparative tests with UTXv2. I had only few screenshots of the places I selected but from what I can see. On one hand – it includes a landclass. It’s not a perfect landclass scenery (like FTX regions or even openLC) but it’s an improvement. Some cities are still missing in FSX and vector data can not change it without a land class (I tested it over Zell am See, Austria). On the other hand – all the screens I compared looked a bit less detailed. Especially rivers and coastlines seem less detailed in UTX. A harbor in Vila Real de Santo António was missing. But the salt pans were included… so it’s hard to tell which one is better for Europe alone.

Everyone who flies VFR will be delighted to see all these roads, rivers and lakes. Shorelines are simply superb! For a long time I flew VFR mostly over FTX regional sceneries but with this add-on – visual navigation over the whole world becomes possible (or easier). I am also very fond of all the lakes I see when I fly airlines – especially after my recent flights over Sweden and Finland.

$70 (AUD) is not a high price for the whole world… but neither it’s a cheap scenery. I think it’s worth this price.