Caravan – name explains everything. It’s a workhorse – rightful successor of classic bush planes. 208B is my favorite Carenado plane for FSX. It’s good. How I review FS aircraft? What could be improved:

It is the next generation of bush planes. The concept was simple – designers in Cessna saw a niche between small, one engine piston planes taking 3 to 5 passengers and larger twin engine planes that often required two person crew and were significantly more expensive to operate. They asked for pilots opinions on what is the best or most necessary aircraft in wilderness (like Alaska). The plane had to be easy to fly, relatively cheap to maintain and as capacious as possible. Answering this needs Caravans loading door match the size of typical cargo pallets which can be loaded with a common forklift (thanks to good position of cargo door in relation to wings and tail). Pilots suggestions were ignored in only one aspect – the plane received a modern tricycle gear that is more popular among pilots (although may have some disadvantages in bush). Caravan was a success and it was soon followed by two larger versions – Grand Caravan with stretched fuselage and two Cargomasters (based on an “ordinary” and Grand Caravans).

There was a niche on the market and it was a blessing and curse at the same time. Caravan soon took it’s place in bush plane market. It’s single pilot could act as ramp agent and common loader if it was needed (and in Alaska it often is). With large cargo space and useful load it could reach all the airstrips that were restricted to small planes. Also – it’s turboprop engine increased safety to a level unheard of earlier (there were only few accidents caused by Caravan loosing engine power in over three decades). Unfortunately 208 capabilities came with a large price tag. This PT6A turboprop engine is expensive.

You may say that it’s an average plane. Sufficient is the better word. It may not be fast but flies with a decent speed and it’s routes do not require speed. Caravan is not pressurized but this does not stop sales of luxurious versions. It’s not a typical bush plane with long landing roll and takeoff distance, but can handle most runways… 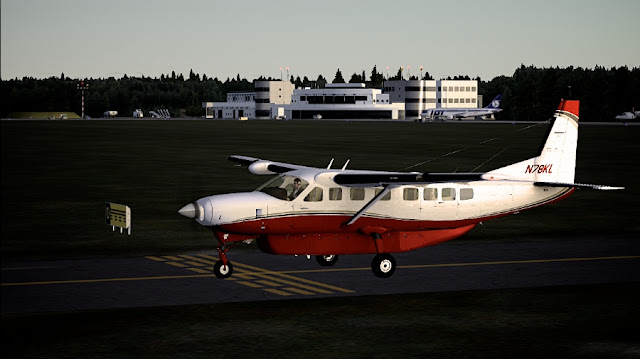 You can buy Carenado’s 208B in popular stores (visit product page ->) and in Carenado shop.

There is official patch published by Carenado – it improves flight model. You do not need to install this service pack if you have bought your C208B recently – it is included in current installers.

With Cessna 208B Carenado we get:

Unfortunately I had to look on the internet for manuals explaining Caravan procedures in detail.

As always with Carenado – installation is simple. Just lick “ok” and “next” whenever you can. You will find documents in FSX folder (Carenado subfolder).

Cessna 208B comes with several liveries and I have to admit that I like this repaints very much. Visual side of Carenado aircraft is great as always.

If you need to repaint this plane – it is not that easy – you will need to deal with white texture. There is no real (layered) Repaint Kit. 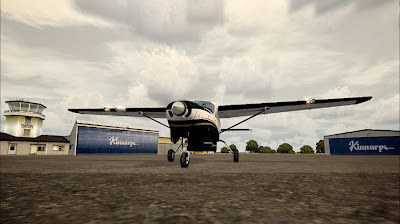 What do we get?

Carenado provides their Cessna 208B Grand Caravan in passenger version. Transport Cargomaster is available as a payed extension. Depending on your choice you will fly 2+8 or 2+11 seat variant. You can change from one to the other with a 2d panel – the same where you can mount belly cargo pod. 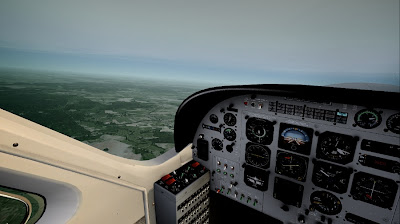 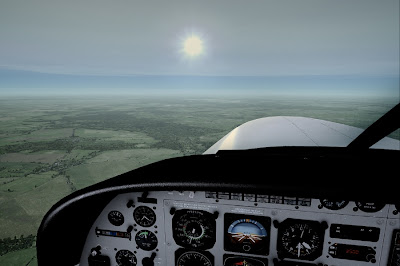 C208B is flown from virtual cockpit and you will hardly find any 2d gauges or panels (GPS is the only one) so every task you need to perform by clicking appropriate switch with a mouse. There is nothing wrong about this concept (in fact – it’s a standard way of doing things). The problem lies in clickspot programming (especially around GPS and its radio). It is very hard to guess where to click exactly. It’s wwwwwwwwwwwwwwwwwwwwwwwannoying when I try to set radio frequency during VFR flight in mountains and I spend a lot of time looking down at my panel.

On the other hand – I like clear and sharp textures with readable markings. Carenado added some wear to the cockpit so the feeling of being in a real airplane grows. Details of cockpit surfaces are superb. I really like this cockpit!

Instruments are build with flat textures of indicators shallowly inset in the panel. I noted this when I wrote Polish version of this review in October 2013 – by now this instruments are getting really obsolete.

There is a curiosity in cockpit – you can switch between 3d and flat GPS and radio. It may give you a tiny improvement in performance if you have a very old PCs but I do not think it is worth trying. Especially since all the knobs and switches apart the few around the GPS will still be in 3d.

I already said something about switches – Cessna 208B is more complex then 172 plane and you should expect more switches here. Carenado made most of them clickable so we can really play with this aircraft and we can even turn some knobs that will have no effect on our flight (ventilation for example)

As most switches work well I do not understand why ELT transmiter is not modeled – there is only a flat and low quality texture placed where it should be.

When describing the cockpit I need to mention something about it that is not right. Systems. Basic ones work well. Advanced – not so much. And by advanced I mean devices like the autopilot, which does not respond in the way it should (there are some real buttons modeled but not working). Instead of an interesting A/P of C208B you will only need the skills necessary to deal with the basic FSX A/P.

There are also some minor bugs – co-pilots direction indicator has the adjusting knob but we can not turn it. TAS indicator ring on the airspeed indicator does not work at all. Some 3 position switches are programmed to work in two positions only.

This are minor flaws that never stopped me from flying Cessna but there should have been corrected (or eliminated during beta tests).

I can chose from two interior versions and there are not that different. Interior looks just as it should – it is not meticulous (that would mean – heavy on frames) and it’s not boring. It’s just in between. Enough to give me something to look at when I am turning my head in cockpit.

When I was writing this review I “discovered” nicely modeled passenger door with stairs. I had never before seen them even though I was flying Grand Caravan often. That shows that I do not really care about aircraft interior. a 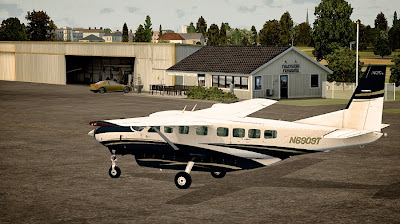 Carenado declares it as a HD and delivers High Definition. I really like how it looks and how the moving parts are animated – I could see small details of flaps and ailerons. If you look closely – you will find static dischargers on ailerons – nicely replicating this delicate parts.

Possibility of adding the cargo pod and “remove before flight” covers changes my rating from 5 to 6. Covers come together with a towing device. 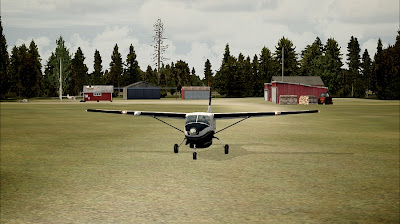 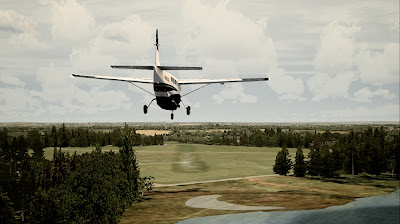 Most important – how it flies

It’s a typical procedure for a small turboprop. Do it step by step and your engine will start. Always. That is normal in FSX but I would like to see something more. Overheating, hot starts… anything… But nothing like this here. But there are no bugs or other simplifications worth mentioning. 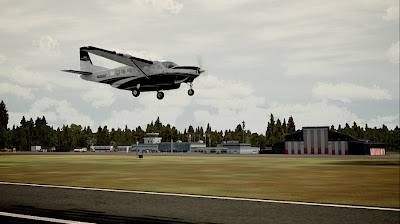 I can not compare this to a real plane but it feels like it requires a proper amount of power to get moving and steers just as good as the real Caravans that I have watched. 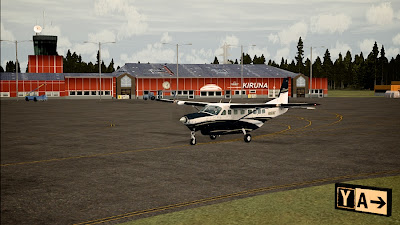 This is where the fun starts. Cessna 208B (the real one) can be a very maneuverable plane when loaded lightly but flies like a brick if you load it to the limit. I like planes that change their characteristics based on weight. (A point for Carenado).

If you try to land it in an major airport – it is not a problem at all. But who buys Caravan to land in Frankfurt or JFK? Find a small airstrip – preferably sloped and with a difficult approach. And load everything that can fit inside this plane. Then go and try this landing. Good luck. Just remember that it is not a STOL plane. Watch your airspeed an attitude at all times. You are dealing with a turboprop – engine response to throttle movement will by slow. (Plus one)

I have never flown a C208 but when I compare it’s handling to specs I think that it requires less runway in FSX that the real 208. Sometimes it can be flown just like a bush plane. (minus 1).

I don’t like Carenado turboprop engines. Like with all their turboprops I know – there is no real limitation of power. You can open you throttle as much as you want. So it is only up to you to adjust your throttle to engine performance. (minus 1 – equals 4*) 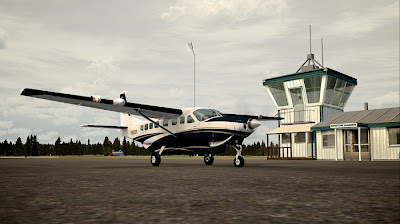 Cessna 208B flies correctly and as far as I can check the real world data – it flies like it should.

You will feel aircraft weight also during flight – in tight turns. 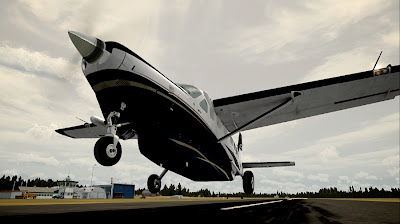 What a silent cockpit! (!!!) Whatever I switched something on – it was silent even though I flipped a heavy metal switch and it should have made a sound. I did not notice any sounds connected to moving over ground either.

Sounds are restricted to engine, door (closing /opening) and stall horn. It is not enough in a payware plane.

I mentioned that there is some kind of engine sound… some kind is a correct expression – it has nothing to do with what you can hear around C208B or even when watching youtube movies recorded in Cessna. 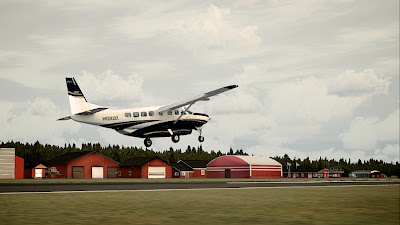 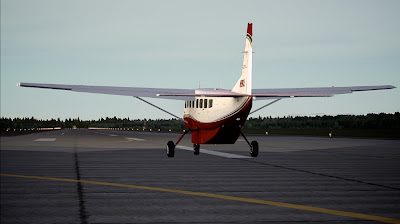 I know that it’s difficult to code turboprop engine in FSX. But Carenado should at least try doing this as turboprops are a backbone of their fleet. They did not. Sadly. Some other developers got it right or almost right on the first try. No need to watch temperatures and torque in C208.

A mentioned unrealistic autopilot. Once again – if someone is trying to do Cessna Caravan – they should know how this autopilot works. It is not that complicated.

I like how it works with my PC. On older PCs you may notice longer loading time of interior textures after switching from outside view. But apart from that – great aircraft. 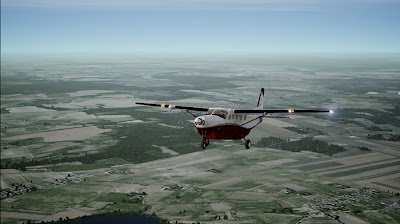 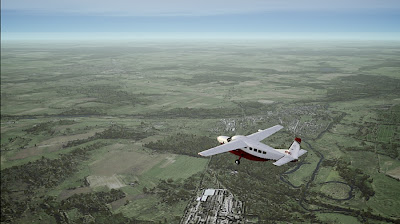 If I would have to point to some “market standard” or “market average” – Cessna 208B would be on my shortlist. It is good. It is correct (mostly). If you do not mind lack of engine realism – go for it.

There is also one strong argument for this plane – it fills a niche and the same niche exists in FSX. There is almost no competition in this class. 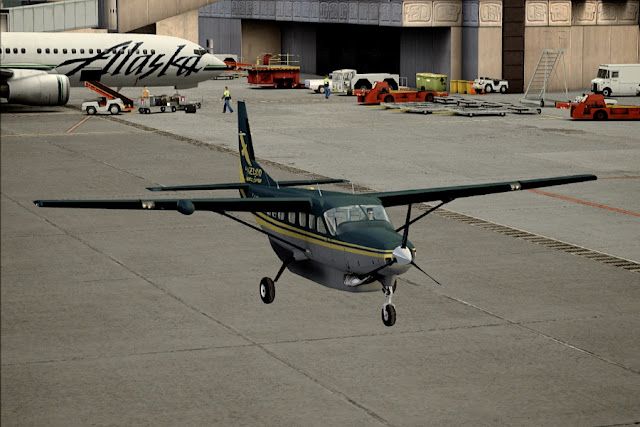 38 USD gives us a good product. It’s a price worth it  if you love Cessna Caravan. Unfortunately for this section – there is a strong competition in planes similar to Caravan. If you want to fly a nice turboprop – you may be interested in Twin Otter. If you like visiting small airports – PMDG Jetstream is only 6 dollars more…

I spend this 38 USD for Caravan several years ago. I think it was a better price than.

Summary
Reviewer
Wojciech Przybylski
Review Date
2015-08-20
Reviewed Item
Cessna 208B Grand Caravan - Carenado
If you find this text interesting - share it with your friends!
Follow C-Aviation.net on Facebook.
If you like my reviews and tutorials - you can support this blog.