I’m flying from Israel’s Farm (WA56) to Sequim Valley (W28). Israel’s Farm is a small airstrip on a farm by the Skagit River – very close to Sedro-Woolley, WA. Sequim Valley is a private airport open to public on the Olympic Peninsula just 50nm in straight line from WA56.

In between these two airports there is Whidbey Island Naval Air Station with a controlled (class C) airspace surrounding it. I will fly around this airspace and around restricted area R-6701. 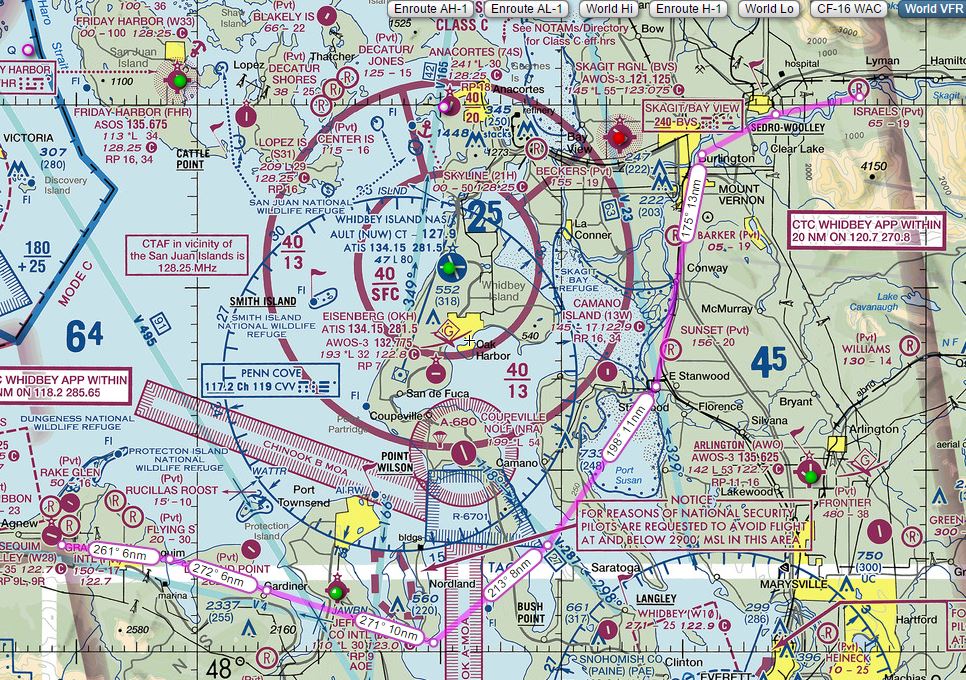 I will be crossing MOA on my way to Sequim. Clearance is not required to enter (or transit) MOA but it’s reasonable to contact appropriate ATC (in this case Whidbey Approach) to ask for traffic information – F-18 at high speed can by quite scary.

The weather shown on the map above (colored circles at weather stations) is a little different then when I flown – there were more blue circles (marginal VFR conditions), less green ones (VFR conditions) but no red (IFR conditions).

This will be a pilotage flight. Pilotage is the basic method of navigation – pilot uses visual reference points (rivers, roads, power lines, cities… – anything he can recognize) as a set of guides from one waypoint to the next.

As I am flying on Vatsim I filed a flight plan using Vatsim Flight Plan Management website with the following route:

In a VFR flight like this it is not necessary to enter all waypoints. Actually – no flight plan is required for such a flight.

In real world the only purpose of such a flight plan is to alert search and rescue in case the aircraft is lost. On Vatsim this flight plan gives other users a general idea of what I am doing.

I use the following OBRX sceneries:

Reviews of both airports will be published soon.

I flown A2A Cessna 172 but any aircraft which can be safely operated at Israel’s Farm is good for this flight. You should choose a small and slow plane – the runway is short and narrow and both approaches can be tricky.

You can follow my flight in Skyvector. Using google map would be also a good idea. I use both when flying.

I took-off a very narrow landing strip in the middle of Israel’s meadow and turned left to follow Skagit River. I planned to use Skagit as my guide to Burlington. Distinctive river bends, power lines and cities confirmed my position.

This part from Sendro-Woolley to Burlington was harder to fly as the visibility dropped and the cloud ceiling forced me down to 1100ft.

With the Interstate 5 as my new guide I flew south. Google map was very helpful – I checked the highway junctions until I was south of Mount Vernon. Barker private was an additional confirmation of where I am.

There I departed from the Interstate and followed Skagit River again – right to it’s estuary. Then over Port Susan (that is a name of a bay) and Camano Island in direction of Whidbey Island. As R-6701 area was close to my flight path – I adjusted my heading a few degrees to the left to pass this airspace in a safe distance.

There is a flashing (Fl) marine light (blue dot) marked on the map. It’s not included in the scenery but by the shape of it I am sure that this was the Bush Point.

I needed to transit Chinook MOA on my way west. No clearance is required, but I look around me trying to spot any military planes that could be flying here. Reading about this area I found an interesting information – it seems that Chinook MOA was a popular way of low flying B-52 some years ago. It must have been quite a sight to fly over a Stratofortress in a small plane.

Just west from the MOA there are two islands. On the Indian Island (the western of the two) U.S. Pacific Navy stores it’s munitions and kindly requests that pilots avoid flying below 2900ft. When the government uses word “request” nest to “national security” it has an impact… I flown in a safe distance.

Article Name
Israel's Farm to Sequim Valley (WA56-W28)
Description
Flying A2A Cessna 172 in bed weather from Israel's Farm (WA56) to Sequim Valley Airport (W28) over FTX Pacific Northwest.
Author
Wojciech Przybylski
If you find this text interesting - share it with your friends!
Follow C-Aviation.net on Facebook.
If you like my reviews and tutorials - you can support this blog. 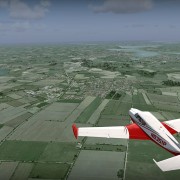 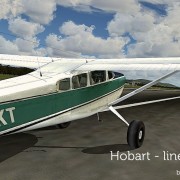