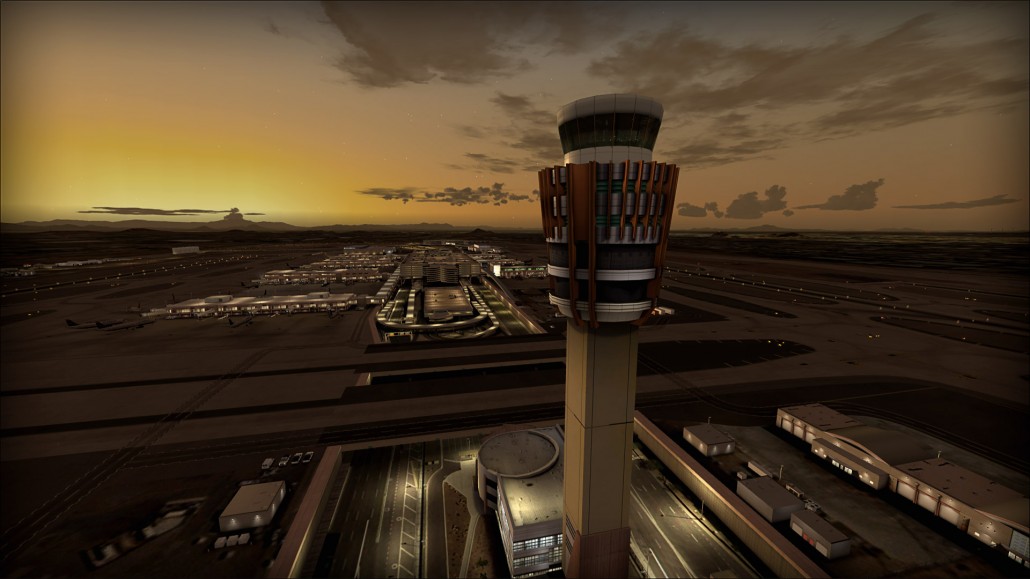 The best (prettiest) time in Phoenix

Phoenix Airport is one of the largest in the world keeping a place in the second or third ten of them (currently it is 17th in terms of the operations number and 23rd in passenger traffic). KPHX serves as a hub for US Airways and an important destination for Southwest Airlines. The latter airline does not use hub-feeder system but Phoenix, being the sixth largest city in U.S., is one of it’s most popular destinations. Distinctive Southwest liveries are often seen in photos taken here. You will see them on my screens.

Sky Harbor is, for it’s size, very well organized. Due to constant winds in this area all (three) runways ale arranged on east-west axis with two runways south of the terminals and a single runway on the northern side of airport.

There is an interesting Sky Train people mover that goes on a 30m high (100ft) bridge over one of the taxiways. It can not be used by Airbus A380.

Automated People Mover (APM) consists of a special electric vehicles that uses a grade-separated line connecting terminals and parking lot. Similar system is being used in other airports. London Heathrow and Dallas Airport are using the same type of APM as Phoenix. 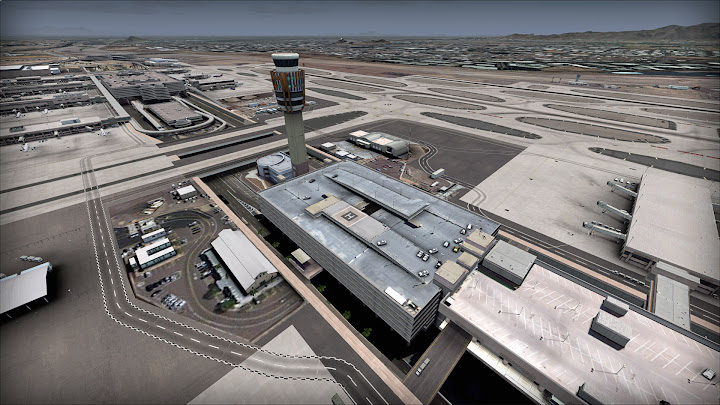 This is one of this solutions that I do not like but I understand and accept. Flightbeam uses FSX add-on manager to validate the installation. As often with such complicated solutions – it does not work every time and some people reported issues on FSX related forums. I myself also had to reinstall it and register once more. But now it works!

As I said – I do not like to be bothered with complicated product registrations but I understand that due to piracy the developers need to take appropriate steps. If anyone is in fault for this inconvenience – it is the people who download illegal software.

Baggage carts waiting on their parking

I have mixed feelings about the manual. When I fly around U.S. I struggle to find my stand as the standard airport diagrams do not show stand numbers. When I am to select a stand in FSX – I have no idea which one to chose (that is why I always choose the same for my 777). The manual could contain a simple drawing showing this positions in relation to terminals and aprons.

On the other hand – this is one of the finest manual designs that I came across in FSX. It just looks great! The color is well chosen and there are beautiful screenshots as illustrations. I learnt a lot from airport description that is included. Good Job!

The manual consist of:

Shadows on the building

The configurator changes fsx.cfg settings. In my opinion – it is completely useless and should not be used (instead – play with fsx.cfg yourself). The configurator allows access to some features that are no longer relevant in FSX SP2 or Acceleration or Steam Edition…

Fire department – I like all FD buildings in this scenery

For the best quality you should set TEXTURE_MAX_LOAD parameter of your fsx.cfg to 2048.

IFR traffic makes most of Phoenix operations. Airliners and cargo planes of any size will fit perfectly. Business Jets should taxi to southern aprons of FBOs. Military pilots can benefit from Air National Guard hospitality.

Where to? Anywhere you want and you aircraft can fly! if you want to follow real routes strictly – choose an airport in the Lower 48 and Canada. British Airways flies to London Heathrow and there are flights to Mexico and Hawaii.

If you prefer Cessna 172 – you surely can (I have seen a photo of C172 in Phoenix). It is a rare sight there but it is interesting to watch a huge airport from such a small aircraft.

This airport is huge! It was my first impression. I started a flight in a Mustang at Cutter FBO (southern side of airport) to fly to Twentynine Palms (read my review). I saw… vast empty space in front of me. Maybe it was not entirely empty – I could see many taxiway signs but the terminals just loomed in a distance. In front of me there was an apron, then a taxiway, runway 7R/25L, another taxiway, runway 7L/25R and two more taxiways before an apron and Terminal 2 (the smallest). From 2km distance even the tower was not very impressive.

Static planes and the last complaint in this review

The impression of emptiness deepens because there is (almost) no one around. I often fly without AI traffic and being on a large airport when there are no planes around is strange. I get this odd sense of being in a horror movie where everyone else just disappeared.

There are few static planes – one is parked in an open hangar and there are several KC-135 tankers on ANG Apron. And that is all (at least I think so – the airport is so large that it is difficult to spot any other planes).

If you turn on AI traffic – it’s planes will collide with the KC-135. Unfortunate situation, but not that big of a deal.

The planes that you see on my screenshots are installed from freeware AI packs – I recommend WoAI.

It is empty around here

One of the few static planes

Take a look at Phoenix from arriving plane or a helicopter flying to the helipad on top of a terminal. The view is stunning. Even more so if you are flying in the morning or in evening. The golden hour at dawn and dusk usually brings the best colors but in here this effect is stronger – probably because of the sand-yellow buildings that look perfect in warm light.

From the above you can see the complex layout of this airport. Fortunately – thanks to parallel runways and taxiways crossing runways at straight angles this layout is easy to remember. In fact it looks similarly to the nearby city with it’s grid like streets.

Even before landing you can notice pronounced taxiway markings – they are very well drawn in this scenery.

Flying helicopter over the airport

Flying at dawn and dusk shows how well the airport lighting is adjusted to this times of day. I am actually not that keen of night flying in FSX – I think that the lights look very unrealistically in most sceneries. Here I am convinced that it is actually a good idea to plan a takeoff or a landing between the sunset and sunrise. There are no unnaturally dark or bright spots in this scenery. As you can see on my screenshots – I flown mostly at this times of day.

I have no idea how the Flightbeam team achieved high quality and great performance in a scenery that big… but they did it! The buildings are on par with smaller sceneries of regional airports – designed in detail that you can admire when parked at the stand. You will see small features of jetways, signs, lamps and even warning notices on the walls.

Terminal and the tower

In every scenery it is important for me that the textures on the buildings are in proper resolution and here I am once again surprised (again – in the context of airport size) how accurate they are. Wall surfaces have some structure and lettering is easily readable.

I have my favorite buildings on this airport. The first place goes to Air National Guard hangar – just look at this shade and the quality of ANG logo. The tower is second and Fire Department buildings (there are several similar) are the third. 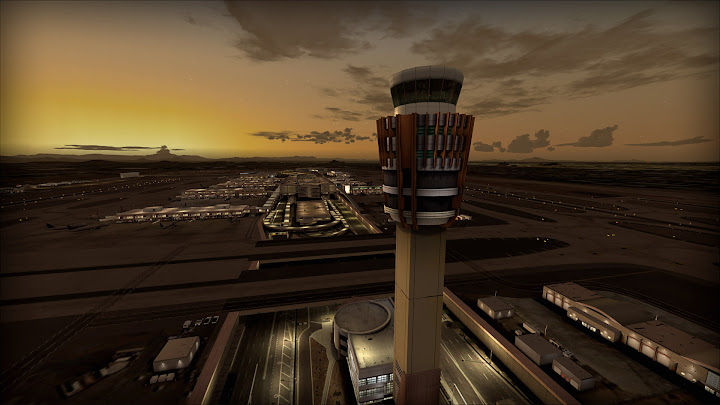 Important because a pilot spends most time taxiing to and from gate. Their markings help get to the destination (gate or a runway).

I would like to see a slight blending between runway and background textures – each runway or taxiway looks as it was cleanly cut from the background. But this is something I noticed while I was walking around the airport. It is not a problem for a pilot looking from his cockpit.

Once again in this review – I like the quality of textures. Markings are clear and look realistically. Even during the night I could find my way according to this lines, signs and lamps. It’s an evidence of good planning at the real airport that was recreated in this scenery. 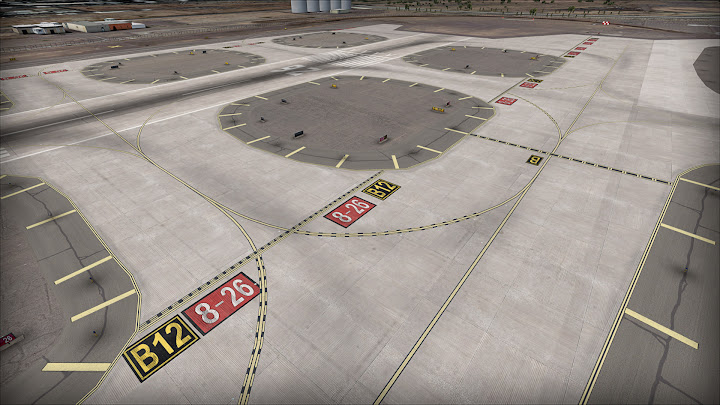 Do not like as much: sparse distribution of the above items in some parts of airport.

I need to mention that I have no idea how the performance testing went and I am sure that the number of objects impacts performance. That is why small items are not that popular on large airports. It is a little different here – there are places where I found lots of objects and there are other places – almost empty. I would really like to see more little things in front of FBOs and ANG hangar.

The airport has a complicated access road system running along the east-west axis of the airport under all terminals. This roads are connected with surface and parking lots by ramps. It is all shown in the scenery! If I was earlier complaining about the lack of static planes – now I need to praise the number of cars placed in this scenery. And they are very well placed, indeed.

There are also airport vehicles that move around. It is a nice feature and it ads live to the airport. 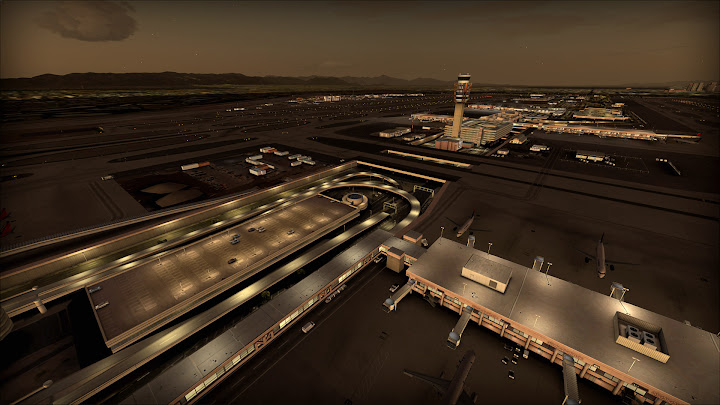 Sky Train requires separate mention. It runs along it’s line. In one place crosses the taxiway 30m high above the surface. You can actually taxi below a running (animated) vehicle. Just remember not to take A380 under this bridge.

Surprisingly good! I did not expect such a performance at an airport of this size and quality.

I should add that Phoenix enjoys good weather throughout the year and usual cloud cover should not impact your performance.  You may consider this if you have low-end PC.

It was a really uniform review. From the beginning to the end – 5s in every aspect but two which I rated 6 and 4. That sums my feelings – this is an all around good scenery. The only flaw is the lack of static planes – this is not much of a problem.

I recommend KHPX HD with no doubts.

Quality to price – quite good

34 USD is a little more then average price for such scenery but I can not say that it’s expensive. I am sure that you will be satisfied with what you will get for 34USD (30Euro).