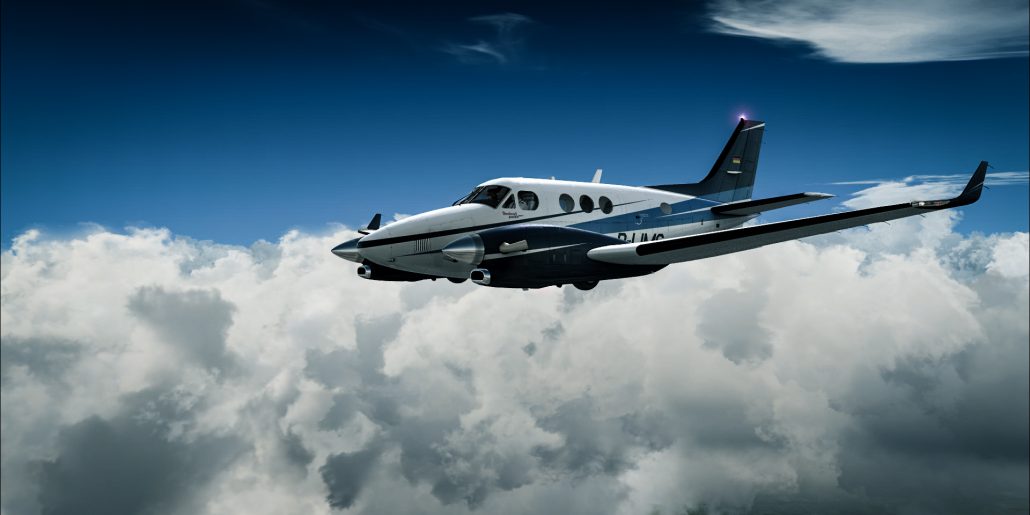 C90 GTX is as “Carenado” as a plane for FSX/P3D can be. It looks amazing (!!!). Flies correctly. It has some systems while other are simplified (or just a little buggy). It’s carenado-comfortable in use (I love the ergonomy of their planes). It features some new additions to FSX (FMC in a small plane).

I like how reliable Carenado is with their planes – I usually know what to expect and I usually get just that. And I like the C90, although sometimes it makes me furious. Then I stop flying it… but I always come back.

What can be improved??

King Air line started with model 90. Why 90? – you may ask. If you know the other models in the King Air line 90 seem strange. There are 100, 200, 300, 350. 90 Stands out. It started with the oryginal Beechcraft model numbering. Duke got 60. Queen Air – 65 and several additional designations with the latest model marked as 88. 90 for King Air was actually selected for marketing purposes – it’s clearly a better choice than the original 87 – designation of a modified Queen Air with turboprop engines. But the Queen Air legacy was still visible – early model were marked as 65-A90, 65-B90 and 65-C90. With the latest model – the history of C90 started in 1971.

C90 had everything a modern air taxi required back then. It merged capabilities of the Queen Air with the power of twin turboprop engines (PT6As) which gave it great climb performance and shortened takeoff roll and landing distance.

In the 90s they modified the cockpit changing some steam gauges to electronic (C90GT). Later it was further improved with Colling Proline 21 (C90GTi).

Current model C90GTx is available at a price of $3,5 million. If you are short of money – Carenado offers their plane for FSX for just $39,95.

Together with C90 GTX Carenado offers three other models of the King Air line – 350I, B200 and C90B I like the choice (they are sold separately) and I think it’s great that such an important plane is well represented in FSX/P3D. 350 and 200 models are larger. C90B and GTX have different avionics. Anyone can find something to his/hers liking.

It’s an electronic download and the installer is fully automated.

It’s available for both FSX and P3D.

Unfortunately, it’s also a typical Carenado in terms of manuals. Many files, weak contents. If you are looking for systems description – don’t. Proline 21 manual consists of just 13 pages with many pictures. One can hardly learn how to use Carenado’s Proline. Without previous knowledge (from other FMC equipped planes) I don’t think that I would be comfortable with this FMC. Due to some simplifications and changes in avionics real manuals may not be fully helpful too (if you can obtain them).

There are also checklists and power setting tables. As usually with Carenado – checklists seem to be copies of real world documents and you may find one or two items that are impossible in the sim or simply not working. Beside that – checklists are ok.

I like Carenado’s work on power setting. These tables they provide are a really useful tool for flight planning. Few developers care about the economy of their planes and Carenado stands out.

AIRAC 1310 (October 2013) database is supplied. Navigraph installer updates it automatically (Navigraph service has to be purchased separately). After the update the plane will compile the database – it may take several minutes. You will be properly informed with a 2d warning.

It’s one of those planes that I simply like. King Airs are nice. Even more – it’s elegant. Small King Airs with classic tail seem even more harmonous to me. And the large windows seem like a luxury – a good feature of a plane that is supposed to carry rich people on their business travels.

But I was supposed to write about Carenado’s rendition and I’m sharing my admiration of the real plane. Why is my attitude towards the aircraft so important? Because it’s how I judge the work. Even small mistakes with this plane would mean a lot. Fortunately – there aren’t any. It’s a joy just to look at Carenado’s C90. I noticed that during cruise with AP on I spend a lot of time in outside views. I rarely do that with other planes.

I also like the interior. It has a fresh, out of the factory, look. If something can be opened or turned – it usually is. For example, one click opens cabin door, another opens table. When I wandered into the cabin to check if the back shows the same quality as the front (it does) I noticed a clickspot on the window. When clicked the window turns and darkens – that’s a nice animation of how polarized window works on a real King Air.

When on ground – doors can be opened. Carenado provided a 2d panel to control door and static elements like pitot cover that can be toggled while the plane is parked.

And there is the cockpit. My place of work. It leaves no doubt that it’s no longer a small private plane but a place of work – with arrays of switches and color coded circuit brakers it looks serious.

What is great about C90s engines? They break! I love it. Ok – to be honest – it’s one of the simplest failure mechanisms available in FSX with binary states – the engines are either broken or they work just fine but still – this feature will change how you fly the plane in FSX/P3D. The throttle is no longer pushed forward until it stops (that’s the best way to kill engines) but needs to be set at correct power settings (torque and ITT). Finally, these gauges have a reason. I can think only about a few turboprops for FSX/P3D that would have engine failures modeled in any way. That’s terrific.

Unfortunately, this is where improvements stop. C90s engines are coded with the basic (and wrong) FSX/P3D logic which means they show incorrect temperature values. This means that some restrictions added by failures will be reduced with altitude (as the temperature drops). In the real world – ITT would increase with altitude and pilot would have to check power settings to keep engines healthy.

There is one additional test I do when testing my aircraft – fuel flow and fuel economy. Does the plane take just as much fuel as the book says? Yes, it does! More or less of course, but the difference between the C90 and performance tables is perfectly acceptable. Power settings tables can be used for flight planning.

My experience with systems is similar to what I think about the engines. It’s amazing to have Proline 21 in FSX and P3D. With all those G1000 planes I am really happy to see something different. Proline 21 is somewhere between a full grown FMC that you would find in an airliner and an advanced GPS from a GA plane. This is something that I really wanted to see in my sim.

How did it work? Routes and approaches – correct. AIRAC updates – available. SID and STAR – work correctly and without major issues (I had some issues in Carenado’s Phenom). As long I just flew pre-planned routes – everything worked perfectly. Issues arose when I tried something advanced like re-routing or changing procedures in a middle of STAR. Once a wrong direct command cleared my whole flight plan for example. This is a serious problem when it happens in the middle of instrument approach in bad weather.

There are also some simplifications. For example, right and left screens are cloned. It may save performance but I miss the ability to show different views simultaneously and peek to my co-pilot’s screen to check if I’m on the right path.

Other systems work in (once again!) typical Carenado way. Some work well (pressurization is very nice), some are simplified (lights – although they look marvelous at night!). And some systems don’t work at all (or they don’t work as they should) – fuel system, for example, has some typical Carenado limitations (I mentioned this in my review od Beech 1900).

If Carenado needs to be praised for something it’s how they approach usability of their latest planes. Just point a mouse over a knob – small arrows will show up. If the knob has several rings – they show which one will be affected. Screens can be displayed as 2d panels with a click on the top of the screen.

The only downside to the usability – FMC does not support keyboard input. The manual says it does, but it doesn’t say how. Thet would be useful.

It’s pleasant but shows it’s weight and size. Seems a bit heavier compared to Duke and less agile when compared to Twin Otter. That’s correct according to descriptions of real world planes that I read.

When I wrote “heavier” I meant standard maneuvers performed by King Air pilots. It’s behavior in any non standard situations lacks credibility – I don’t think that it would be a good tool to check how a King Air would behave in stall for example.

Good, with some reservations. Frame rates were good. When compared to other glass-cockpit planes – they were very good. I noticed a disquaieting increase of VAS in several flights and I once had an OOM error in one-hour long flight on a route that I previously flown in over planes. It happened once.

C90 GTX is as “Carenado” as a plane for FSX/P3D can be. It looks amazing (!!!). Flies correctly. It has some systems while other are simplified (or just a little buggy). It’s carenado-comfortable to use (I love the ergonomy of their planes). It features some new additions to FSX (FMC in a small plane). I like how reliable Carenado is with their planes – I usually know what to expect and I usually get just that. And I like the C90 although sometimes it makes me furious. Then I stop flying it… but I always come back.

I like how reliable Carenado is with their planes – I usually know what to expect and I usually get just that. And I like the C90 although sometimes it makes me furious. Then I stop flying it… but I always come back.

$40 for a plane featuring a working FMC? It’s a good price. Together with great visual quality and nice performance it outweighs some simplifications and minor bugs. 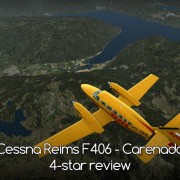