Scotland. Another piece in ORBX regional puzzle – similar to Norway, Germany, and their North American regions. Is it equally interesting? Yes. And no. I like Scotland but not quite as much.

What I dislike about FTX Scotland

You can purchase FTX Scotland through ORBX direct system. Use FTX Central to for installation and configuration. The user guide is also available there. It is a standard ORBX PDF file with a description of how to install the software, how to set it up, etc. The addition is a Google Earth file with selected objects is located in the installation directory (sim folder / ORBX / User Documents).

What is in the package?

FTX Scotland is an advanced landclass-based scenery with custom objects. You will get: 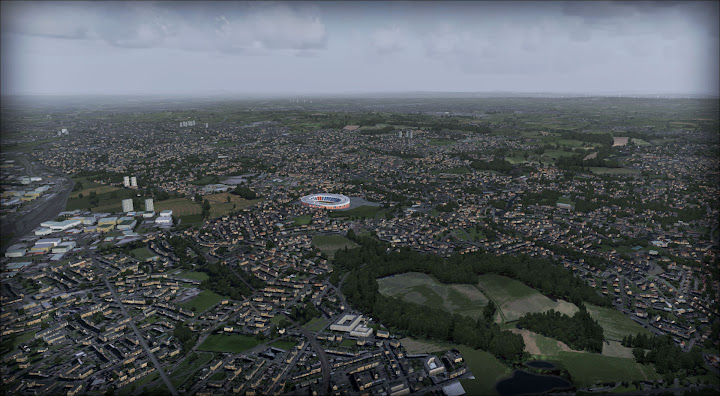 Good, but not at par with Norway. Twenty-meter resolution is sufficient in lowlands, but mountains could use 10m mesh. However, I have to say 20m mesh is ok in most locations around the scenery. Calls for improvement, but still much better than default FSX/P3D elevation grid. Thanks to this scenery Scotland become much more hilly and low flights over the highlands are pleasant.

Once again – a good feature, but somehow not living up to the highest standards that ORBX got me used to (with Norway or Alaska). They made the landclass well. I like how the grass-covered hills change into rocky mountains. I’ve compared this scenery with photos and with my memories from a trip to Scotland – it is as similar as a landclass scenery can be. Mostly.

It is a bit worse in places that require precision – for example on small islands (and I spent most of my time in these locations). And near airports (again – an important place to cover with high-quality scenery). Just a tiny improvement would go a long way towards improving our experience. In Norway and Alaska, ORBX has succeeded. Here – it came out worse. The textures used in FTX Scotland are perfect for large areas. It’s the details where they fall short.

…the bad and the ugly

The autogen is by far the strongest feature of this scenery. Edinburgh is stunning, other cities not far behind. The buildings have a specific British or Scottish shape and layout.
For me, ORBX is a leader in creating forests in their scenery. Here you can see it. Where there is a forest – we fly over an area covered with trees. Finally, the end of pseudo-forests, which comprise a dozen trees per hectare (or acre).

The suburbs of Edinburgh

That’s how forests should look

There are places like Edinburgh with a dozen characteristic buildings and they fit the scenery perfectly. There are also bridges and viaducts, among which many are stunning buildings that bring the real ones into FSX or P3D. But… there are places like the Hunterston power plant that is a disappointment.
Yes… I know that a power plant is not a particularly delightful building, and it is difficult to do anything about it. But if someone makes it as a scenery object, it would be nice to give us something more than a box placed on the texture of the parking lot. Honestly, I’d rather not let Hunterston be in this scenery in its current shape.

Nuclear power plant – not bad, but it’s better to stay at a distance

Fortunately, they got bridges right. The creators of the scenery recreated the characteristic appearance of Scottish bridges – and many of them belong to the monuments of the technique of the industrial era. I like it!
Between those extremities, there are scenery objects ranging from bad to nice, but mostly ok. The only thing that caught my attention is the poor environment of some of them. In contrast to Alaska and Norway – there are objects I‘d call “freestanding”. For example, a castle is usually surrounded by a park or some other buildings. Having a castle in the middle of a meadow, with emptiness surrounding it takes away part of its potential as a scenery object and even a great model (and they are cool!) is wasted.

Roads and railway lines between the cities made a great impression on me – I do not know if the best among the known ORBX scenery (including Norway they issued later and even the German sceneries). I spent a lot of time flying a helicopter at a low altitude along these roads and they were always great guides (I flew with a roadmap!). Also, the shorelines are among the best elements of the FTX scenery and such a complex coastline like this in Scotland shows how important good scenery is.

Details of the shoreline!

Just like in other FTXs ORBX improved the airports and added a few small ones. They are way better than the default in FSX/P3D, but it’s another element that makes me miss other FTX sceneries I use. I do not expect the quality of paid airports. But I have the impression that some airports show a lack of … imagination, creativity or (most probably) of time.

The scenery uses (I have this impression) the same library of airport facilities used in other FTX sceneries. It allows you to add nice buildings, cars, static planes. Even three-dimensional vegetation appears elsewhere. If I love ORBX‘s enhanced airports in Norway why I feel unsatisfied in Scotland?

Something is missing here – although I appreciate these few elements

That’s how it should be! The scenery is friendly. I’ve flown demanding planes and have seen no significant impact on my computer.

People with weaker equipment and FSX should adjust the autogen settings – these houses and (especially) forests can kill if you set Dense or Very Dense. P3Dv4 users should find it performing well even on high settings.

4 stars here – Norway got 5. Alaska got 5. Scotland is almost as good. Almost. In my review of Norway, I wrote that ORBX sets a market standard for such sceneries and I still think so. FTX Scotland is good scenery, which is worth having if you are interested in flying over Scotland. But Norway is better.