Engines of the Aerosoft’s Bronco are among the best turboprops in FSX and P3D. Why? Let’s start with correct torque, temperature and engine limitations. And failures. Not enough? Try performing startup and shutdown procedures exactly by the book.

In the previous part of this review I shared my mixed feelings about the systems simulation in Aerosoft’s Bronco. Today it will be different. I am delighted and I will praise Aerosoft for it’s creation.

Let me start with some useful information in case you do not read the manuals carefully (which is a major mistake). This aircraft has a custom propeller management system which is controlled by condition lever. Set it to Normal flight or Takeoff/Landing for takeoff, then switch to Normal flight for cruise part of your flight and then once again to Takeoff/Landing for landing. If you need to shut down the engine – place the lever in Fuel shutoff position or (in flight) to feather position.

If you have an axis configured for the prop speed – you should unset it or place the lever in full forward position.

Side story. I illustrated this text with screenshots taken during my carrier ops and FAC (Forward Air Controller) training over Californian Desert.

Carrier landings. OV-10 is capable of unarrested carrier landings on both large fleet carriers as well as on the smaller assault ships (like USS Tarawa or USS Wasp). Carrier take-offs are performed without catapult assistance and such takeoffs require the full length of angled deck on a carrier (USS Nimitz). I tried doing front deck takeoffs (at the normal catapult launch distance) and it is possible but the liftoff speed is barely sufficient to keep the aircraft in the air. For landings – aim for high touchdown rate (700-800ft/min) with no flare before landing and use full brakes and reversers. You will stop at a safe distance from the edge of flight deck.

Forget about the usual way of how you operate the power lever in FSX. With full power applied both engines will quit after a short while.

There are two instruments that you need to carefully observe while setting power – torque and temperature gauges.

Torque limit for a continuous flight is 1875ft·lb. You can exceed this limit momentarily if needed (for example during short field take-off or in combat). Do not exceed 2200fl·lb at any time (a warning light will appear). You need to use your judgement in the range between 1875 and 2200ft·lb as to the time you are allowed to fly at this power settings. My test show that after a few minutes your engines may quit. And they will be damaged so severely that you will not be able to restart them in flight.

The second gauge that you need to observe is TIT (turbine inlet temperature). The gauge shows corrected value (it is not exactly the temperature, but the calculated value that limits you). Do not go over 1000 degrees. A red light will warn you when the temperature exceeds 996 degrees.

The above information applies in standard conditions. Should you choose to fly over desert on a hot day – you will notice that critical temperatures are observed much lower. In fact – you will find the Bronco seriously limited in terms of power in such conditions. This is correct.

Newbie friendly option – you can disable all failures.

It is not an airliner from the sixties but a combat aircraft that was often deployed close to the front line. You should not expect a long and complicated startup procedure here – just flip some switches, move some levers and you are ready to go. But still – it is interesting.

It’s a gearet turbine. This means that the propeller is connected to engine shaft through a gearbox (unlike in free-turbine designs like PT6A what powers King Airs, Dukes and Twin Otters). T76 starter must thus overcome the drag caused by propeller at startup. To lower the drag prop blades are turned to zero angle (think of it as something opposite to feathering). Latches keep the prop in this position and you need to disengage them after startup and engage them again while shutting down. The correct procedure for this is described in the manual and works exactly as it should in FSX.

It is a small detail but is clearly shows the amount of work and custom programming that Aerosoft put into this plane.

This is not just an interesting device that you will mechanically use in FSX. Try shutting down your engines while leaving props unlatched and you may find yourself in trouble restarting them again. And if you abuse the starter it will fail. This is also coded and it is how it works both in the real world and in FSX/P3D.

Hot starts and hung starts are coded so pay attention when applying fuel during startup. The difference between the two failures is in the severity and consequences they have. Hot start is basically a fire inside the engine. It may develop into a serious engine fire or simply cause damage to the engine. It usually happens when the pilot turns on the fuel before there is enough air flow through the engine to keep the combustion chamber cool. You need to visit maintenance after a hot start (go to 2d panel and repair the engine).

Hung start is otherwise known as a failed start. It can also be caused by incorrect fuel supply or by a starter malfunction. If you notice that engine RPM do not rise over 50% – you are probably dealing with the hung start. Abort, clean the engine and try again later.

You will see fire and smoke when an engine is on fire in Bronco. Shut off the fuel and use fire extinguishers to put out the flames.

Turbine engines are prone to flameouts in heavy rain and icing conditions – basically in every situation when the self sustained combustion may be interrupted by external factors (like water in combustion chamber).

Although I did not observe any problems in rain the flameout caused by icing is possible in Aerosoft’s Bronco. It may happen when ice accumulates on engine inlet (invisible in FSX) and then becomes sucked into the engine. It melts before reaching the chamber and then extinguishes the combustion. To prevent flameout – engage continuous ignition which will relight the fire automatically (it will be unnoticeable).

I did several flights to test inflight feathering and restarts. Works like charm.

Aerosoft’s Bronco will show engine wear when the engines get closer to TBO (time between overhauls). You may notice performance degradation after 800 hours. Then the engine performance will drop again at 1200 hours and again at 1400 and 1600 hours. At 1800 you need to overhaul the engine.

According to the manual the TBO can be shortened due to engine abuse.

The only flaw – lack of randomness

I need to point to one feature that I do not like about the engines. They behave like two exact copies. Get into severe icing conditions without continuous ignition – both engines will die. Fly above the limitations – both engines will fail at the same time. This does not happen in real world. Even a little randomness would make this much more believable.

I like engines that behave correctly in FSX. The level of simulation shown in Aerosoft’s Bronco is rarely found in FSX aircraft and is even less common in turboprop engines (which are terribly incorrect in most FSX/P3D add-ons).

In terms of engines Bronco is among 4, maybe 5 of the best turboprops available for FSX. You should buy this plane for this reason alone – even if you are not that fond of military aircraft. 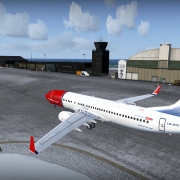