Boeing 777 Flight Deck. What should you expect from PMDG 777? A few comments about the looks, ergonomics and handling of 777’s cockpit. 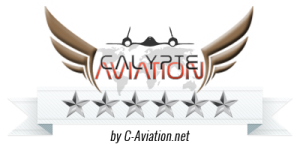 How I review aircraft

The flight deck. I stand at the back and look around. You may think that I am at the door, but actually this is what a person sitting in the left jump seat would see. In the back of this flight deck there are two jump seats for observer or instructor. Door is located on the left hand side. 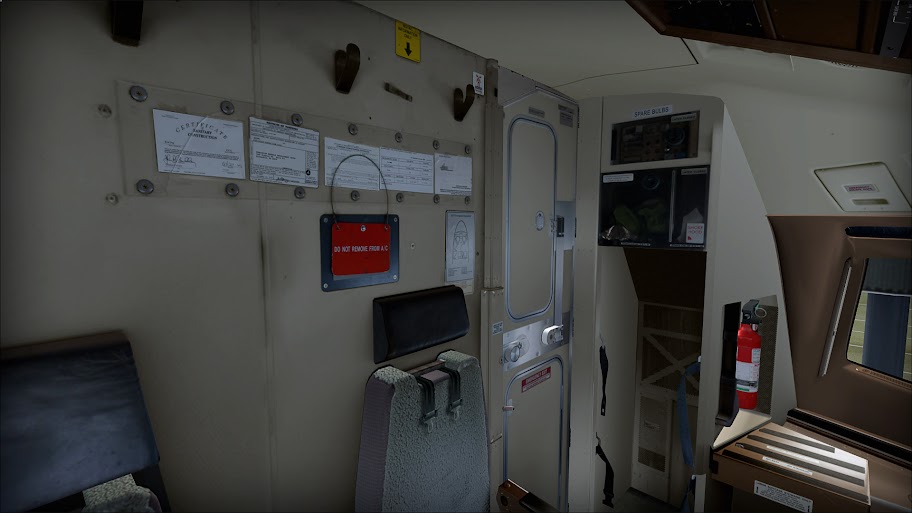 Above the jump seats, aircraft documents are fixed behind a plexiglass cover which is cracked. These documents are clear enough to distinguish Certificate, insurance policy, emergency equipment, etc.

Emergency oxygen valve is located close to each seat. During cockpit check you should test if it works. Push the test button and the oxygen will flow with a quiet whiz. Check if the knob moves – go through all positions – Normal, Emergency, 100%. If it’s ok – set it back to NORM.

The pilots have already brought their bags – there is a huge flight bag filled with checklists, charts and manuals next to each pilot’s seat. 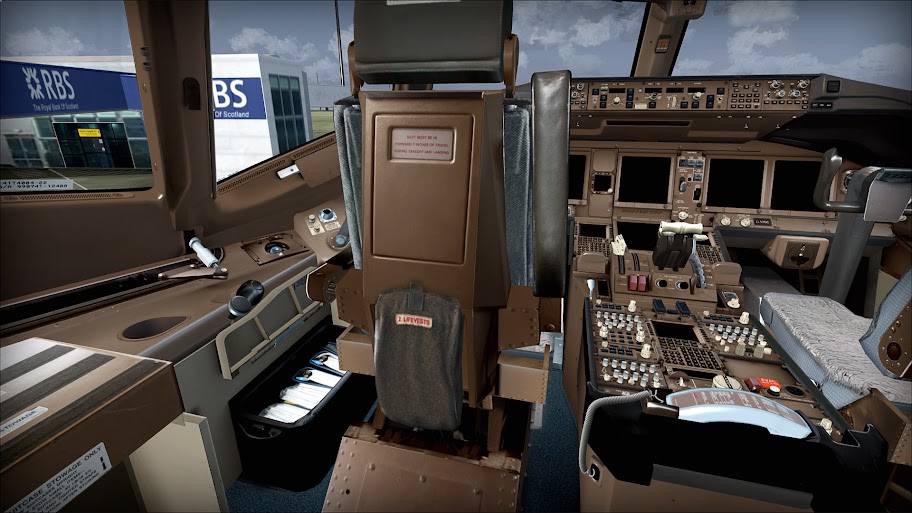 From the captain’s seat I can admire my new workplace. I really admire it! PMDG uses perfect textures – in no place are they blurred or too-sharp. I like how the wear was indicated on several parts. It is not an old plane but the metal plate on the yoke is scratched – especially around it’s edges. Plastic parts of the yoke are shiny in places where pilot holds his fingers – the same can be observed on other parts that are often touched. 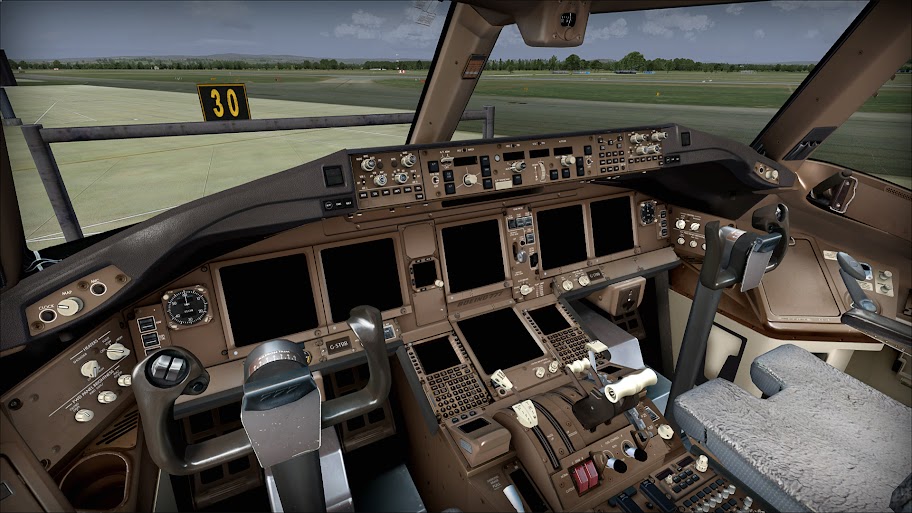 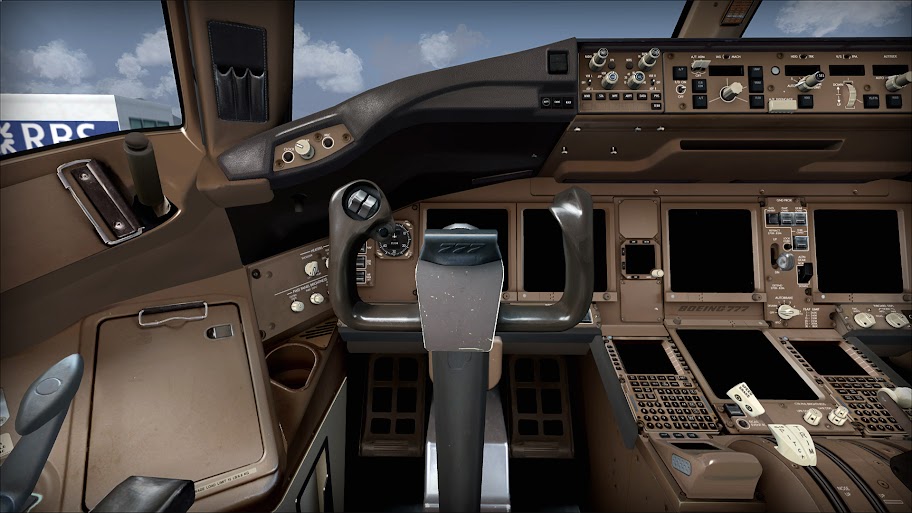 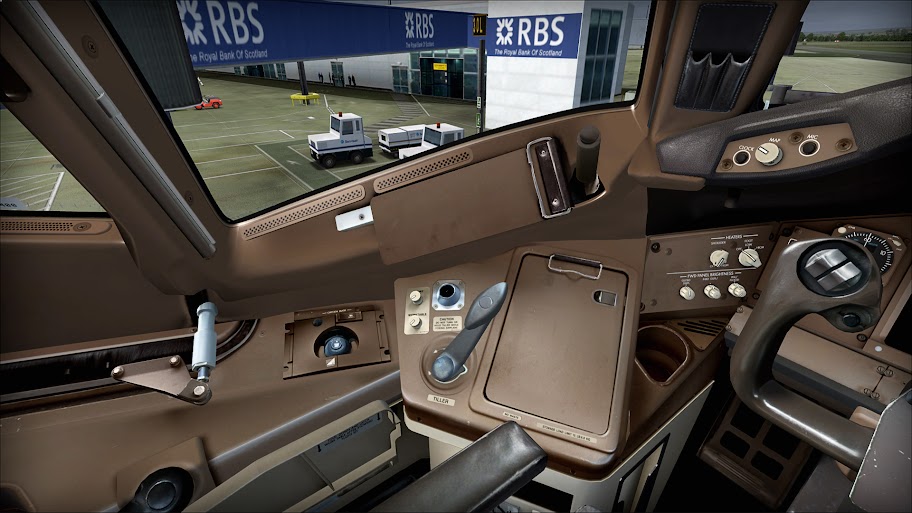 Left side of the cockpit

The closer look at the grooved knobs shows how difficult it is to keep these parts clean. Trim knob is the worst – I think it should be replaced soon.

One of the best impressions from this cockpit is how authentic the buttons and switches sound. Switches and buttons making sound when they are pushed of flipped is almost a standard feature in payware aircraft. Almost – I still find recently published payware planes that have silent switches… This is not the case of PMDG 777. Here not only the switches make a sound but they also make different sounds depending on the knob, switch or button type and construction. There are even slight differences between switches of the same type – like in case of two Auto-Throttle switches. The sound is related to how the switch or knob is build and how it works. A heavy and large wipers knob makes a louder and “harder” noise than radio frequency selector that just clicks quietly.

Usability is very important for me, especially since I bought EZDOK camera and dynamic cameras make clicking in cockpit a little harder. What I noticed in 777 is that I never had to wander where should I click to get the expected result. Also the clickspots are large enough to to be easily targeted by EZDOK users when the camera shakes.

The cursor changes it’s shape and color depending on what the switch does – it’s helpful feature and simplifies operations. In some cases it is an overkill – I do not need a special cursor shape to know that the Flight Director switch moves down – it’s obvious. On the other hand – advanced cursor is invaluable when I use double selectors with a built in button – like the heading selector. Thanks to cursor color I can distinguish which part of the selector I am turning (white cursor for primary selector, gray for secondary). The cursor changes shape when I point to the SEL button on top of this knob.

When flying advanced airliners I like to be able to open some screens or panels in form of two dimensional panels. Shift+2 to Shift+9 keyboard shortcuts open eight panels (there are additional available under clickspots in the cockpit). If you do not want to remember the shortcuts for displays – you can open these panels clicking in the middle of the screen you want to enlarge. Click again in the middle of the screen (or the panel) and it closes.

I do not use this feature often – PFD and ND are clear enough to watch them in Virtual Cockpit. But the 2d CDU is very handy. Even with TrackIR it is not easy to work with CDU in VC.

MCP can be shown as 2d panel with the keyboard shortcut or a hidden button (under DATA button on MCP).

Two position switches can be thrown with a single click of the left or right mouse button.

Three position switches change position to the right (or up) with the right click and to the left (or down) when clicked with left mouse button.

There is some confusion on flight sim related forums about several knobs that you should turn and hold – like BARO and rudder trim knobs. You need to press the mouse button and hold it until the appropriate indicator shows desired value. There is a tooltip provided – it explains that if you hold mouse button down and move the mouse – the values will change faster.

I like how they look and how they are animated! When I press the button – it moves as it should. There is only one exception – CDU buttons are not animated. I assume that this has something to do with FSX limiting the number of animations.

I have never found a switch or a knob in this cockpit that would work differently from it’s real world counterpart. It often happens (even in payware aircraft) that regulator knobs can be only turned on or off – with no positions in the middle – not in this case. If the knob can be smoothly turned – it can be smoothly turned in this cockpit (that is very important when the lights are set). 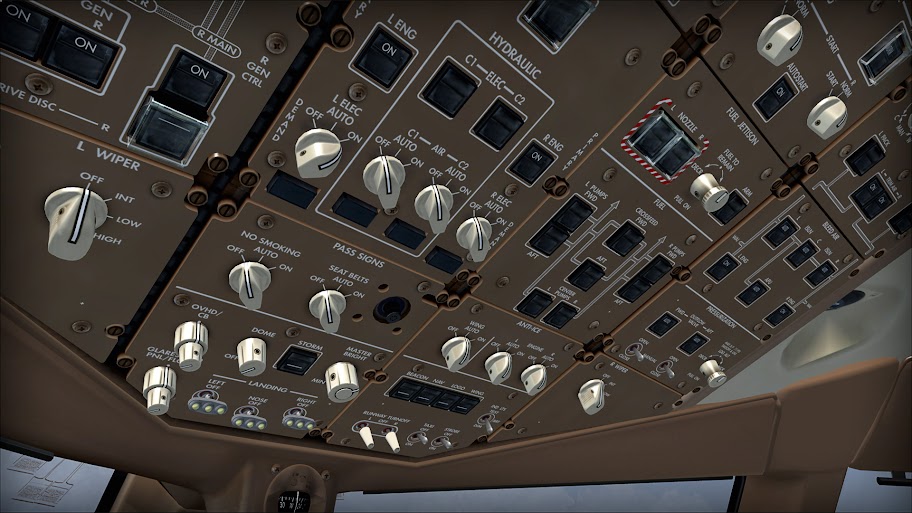 When the flap or spoiler lever is moved in a real 777 – the pilot or copilot has to rise the lever to free if from the detent. Flap lever has a detent for each flap position (up, 1, 5, 15, 20, 25, 30) and speedbrake has three (closed, armed, and operating range). In PMDG 777 both levers move exactly as they do in the real world planes – so you will see there the detents are and how the lever is raised between it’s positions. 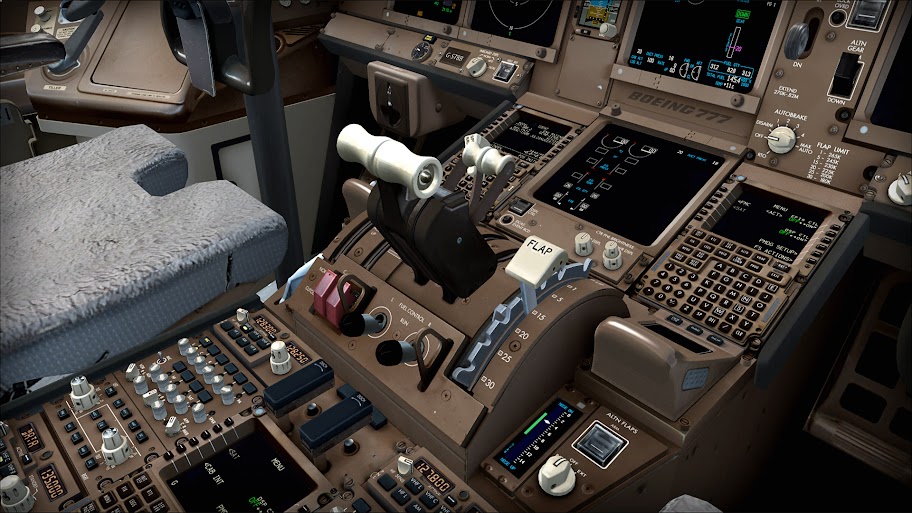 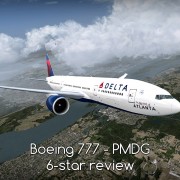 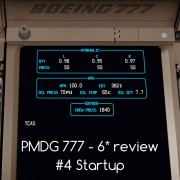 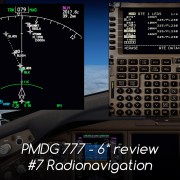 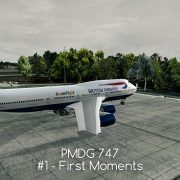 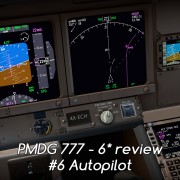 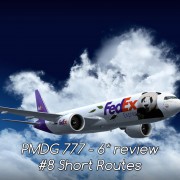 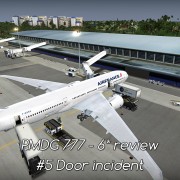