How FIBER_FRAME_TIME_FRACTION can help you with blurries in FSX and why it’s not a good idea to use this tweak. Optimize your HDD first!

Whenever I use FFTF in this article I refer to FIBER_FRAME_TIME_FRACTION in fsx.cfg. It is an optional tweak that you can place in the [Main] section of your fsx.cfg.

For those who need quick answers

The problem – blurries in FSX

Many users, especially those who upgraded their FSX with high quality textures like FTX Global or hi-resolution photosceneries observe blurry terrain on descent and during high speed flight at low altitude.

The main cause of blurry textures in FSX is the time it takes to load the textures. In some situations you can improve it using FFTF tweak. In most cases the problem lies outside your FSX – in your hard drive performance and disk’s queue length.

To properly deal with blurries you should first optimize your HDD:

How to move FSX files to other folder

I got rid of blurries with a proper optimization of my hard drives. You may get some results with FFTF tweak – but they come at a price of worsened performance and you may observe stutters and freezes when high values of FFTF are uses.

What it means for you – when higher FFTF values are set – FSX will spend more time loading scenery (loading large textures or autogen). That is the theory. Let’s get back to Adam’s quote:

The operation of FIBER_FRAME_TIME_FRACTION on single core machines has not changed since RTM.

Therefore, on multi-core machines, there’s very little reason to tweak the fraction because it really only impacts performance of single core machines.

Please emphasize the pointlessness of tweaking this value on multi-core machines.

As you can clearly see – there is no point in tweaking FFTF on multicore machines… or is there?

The statement above could have been completely true back in 2007, but since then a lot of “texture-heavy” add-ons appeared and this changes the situation a bit. My test clearly show that when you have ORBXs FTX Global or a high-quality photoscenery (1m/px or better) FFTF may have a visible impact on blurries.

I tested several different situations using extreme values of 0.9 and 0.1. In some of these situations I saw the difference in results.

Flight lasted three and half minutes. I flew (using slew mode) with constant speed of 400 KIAS for 1:45 min and than I flew 820KIAS for a minute.

When I compare first three flights I can clearly see that FFTF works!

In each of these flights (400KIAS) I observed changing quality of ground textures – blurry textures appeared from time to time – some were getting sharper as I flew above them, some did not change. Clearly in the second flight (FFTF=0.9) the quality of textures was best! They were getting blurrier slower and they were getting sharper faster. I also observed increased stutters in the second flight (FFTF=0.9). There were micro interruptions, “hangs” or “freezes”. They lasted (as far as I can tell) up to 0.5s. From my observations in other flights at this settings I can say that such freezes can last for 1 or 2 seconds. For me – they ruined the experience.

400KIAS flight with FFTF=0.1 gave me lots of blurries. At times situation improved, but then it was ruined again.

This is kind of important

FSX blurries occur when new textures are loaded. That is why blurries and scenery sharpening seems sinusoidal – when a new texture is being loaded – you see blurries, and then the texture sharpens slowly. At FFTF=0.1 some textures had no time to get sharp before FSX had to load the next textures…

820KIAS flight was a little different – textures were getting blurrier and blurrier with only a slight improvement. (Sinusoidal pattern of blurrying/sharpening was no longer that apparent). After some time autogen disappeared too. When I stopped the flight – textures got sharp and autogen was loaded in next 25-35 seconds.

400KIAS was the max speed I could sustain without degrading texture sharpness. Yes – blurries occured but then some textures where sharp (this is what I called a sinusoidal pattern). Above 400KIAS the situation was getting worse – even if some textures got sharper – they never got 100% sharp. And after some time the level of blurrieness was higher… and then autogen disappeared.

The most important was my fourth test flight. Before I took-off – I moved all my textures (ORBX, scenery and texture folders) from my main FSX folder to the new drive. It’s a fast (7200rpm) hybrid drive where I created a partition for FSX add-ons.

Without FFTF in my fsx.cfg my experience was very similar to flying earlier with FFTF=0.9, but I observed no stutters! There was a negligible improvement with FFTF=0.9 and optimized HDD – but it was not worth the discomfort of freezes that I experienced. I also tried some flights with FFTF in range of 0.2 and 0.45 (no stutters at this level) but I saw no difference. 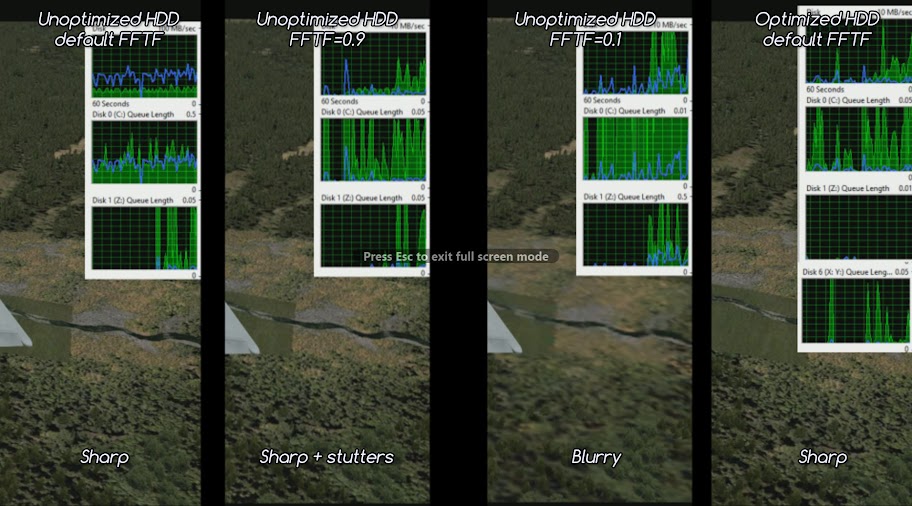 This is what I saw after 15-20 seconds of flight at 400 knots. In all situations except FFTF=0.1 the terrain textures were sharp.

And this is what happened next: 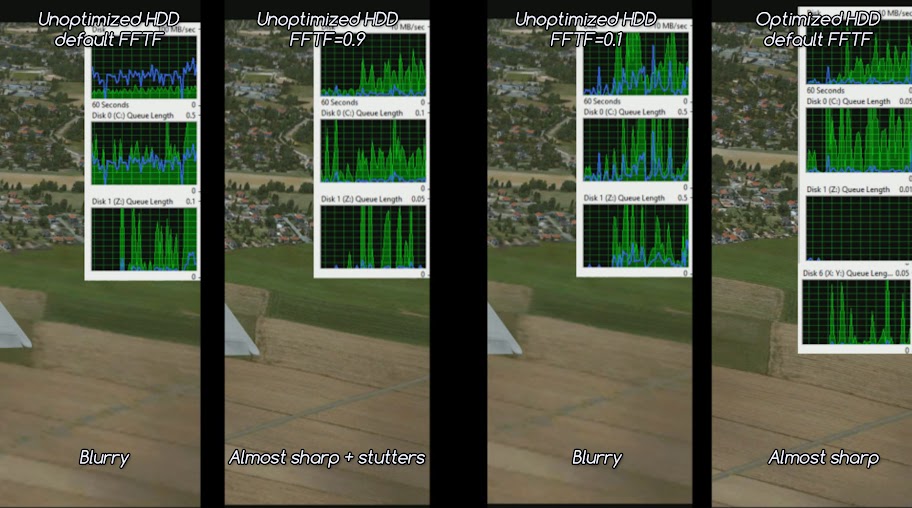 For default FFTF value and FFTF=0.1 – textures got blurry. Only a little blurrying occurred for FFTF=0.9 and for default FFTF on my optimized hard drive. 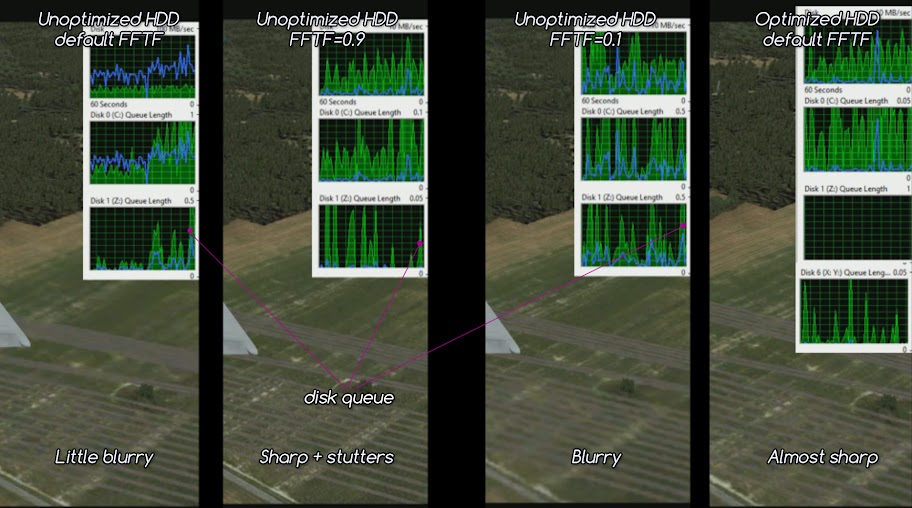 You can see disk queue on my unoptimized HDD. Without the queue on the optimized drive – the texture had been almost as sharp as with FFTF=0.9. Actually the terrain is as sharp as for FFTF=0.9 – only the tracks (new texture loaded a moment earlier) are a little blurry. 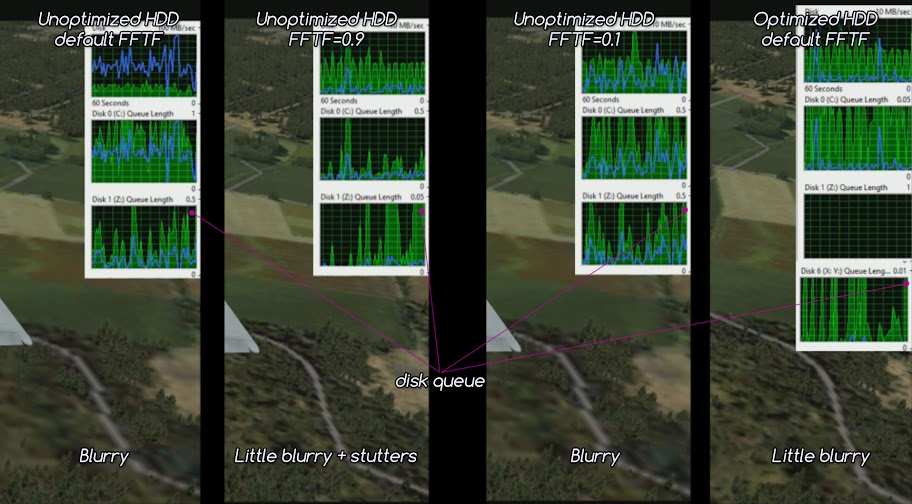 Here I hit the wall. All images are blurry – FFTF=0.9 and optimized HDD are sharper – but still a little blurry. This is what happens when you get to the limit of your drive’s ability. No tweak will help you. SSD may be an option – but it is not a cure for all blurries – take a look at the previous picture – drive manages just fine – it’s FSX that is lagging on the far right image.

And what happens at this speed? 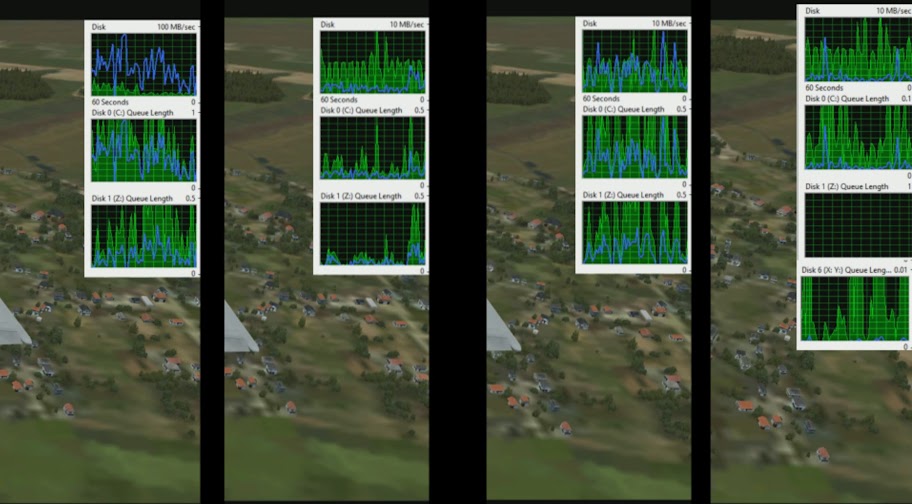 FFTF does not always help. Just as the optimized HDD does not. 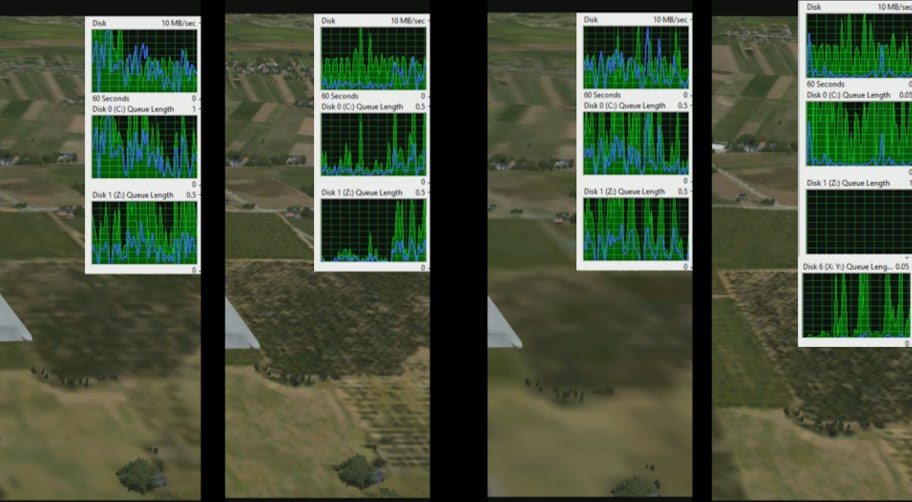 But when they have an opportunity – they do. 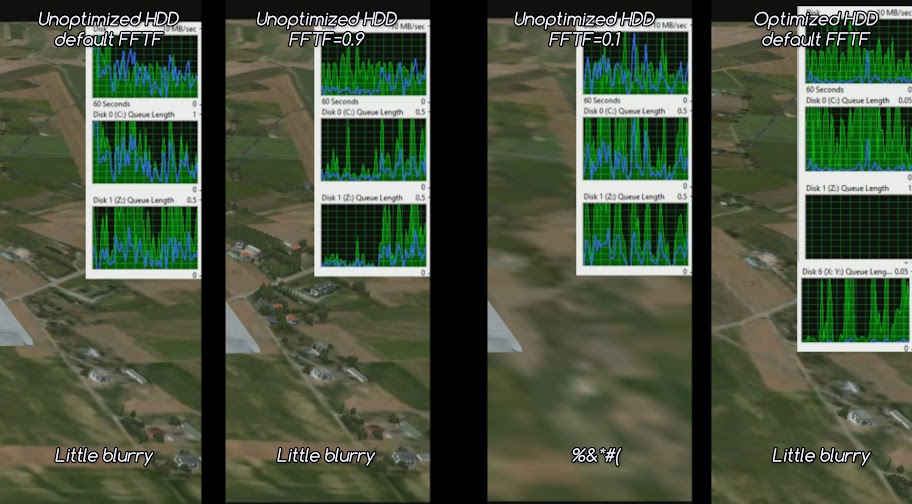 Article Name
FFTF - (not) a cure for FSX blurries (FIBER_FRAME_TIME_FRACTION)
Description
How FIBER_FRAME_TIME_FRACTION can help you with blurries in FSX and why it's not a good idea to use this tweak. Optimize your HDD first!
Author
Wojciech Przybylski
If you find this text interesting - share it with your friends!
Follow C-Aviation.net on Facebook.
If you like my reviews and tutorials - you can support this blog.